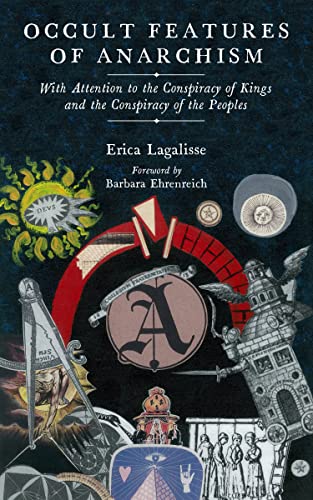 In the nineteenth century anarchists were accused of conspiracy by governments afraid of revolution, but in the current century various 'conspiracy theories' suggest that anarchists are controlled by government itself. The Illuminati were a network of intellectuals who argued for self-government and against private property, yet the public is now often told that they were (and are) the very group that controls governments and defends private property around the world. Lagalisse intervenes in such misinformation. Studying anarchism as a historical object, Occult Features of Anarchism also shows how the development of leftist theory and practice within clandestine masculine public spheres continues to inform contemporary anarchist understandings of the 'political,' in which men's oppression by the state becomes the prototype for power in general. Readers behold how gender and religion become privatised in radical counterculture, a historical process intimately linked to the privatisation of gender and religion by the modern nation-state.

"This is surely the most creative and exciting, and possibly the most important, work to come out on either anarchism or occultism, in many a year. It should give rise to a whole new field of intellectual study." --David Graeber, professor of anthropology at the London School of Economics and Political Science, author of Debt: The First 5000 Years

"A tour de force. Any self-respecting radical should know this history, right down to the dirty history of the 'A for anarchism' sign from its location within Freemasonry and magic. Ripping apart with historical detail our contemporary common sense we learn the tactics of how elite radicals claim power through difference. The significance of this history for the politics of now should not be underestimated and most certainly more widely known. Essential reading." --Dr. Beverley Skeggs, director of the Atlantic Fellows programme at the International Inequalities Institute of the London School of Economics and Political Science, author of Class, Self, Culture

"Erica Lagalisse's Occult Features of Anarchism is a wonderful and learned provocation. Taking the concept of modern politics as a form of theology and magical ritual, she traces some aspects of the origins of socialist and anarchist politics and performance to the Hermetic tradition which influenced the Radical Enlightenment and its originators, in for example, the work of Spinoza. But she also argues that this 'magical' or Hermetic tradition rested on a masculinist coup against women's knowledge, especially in the transformation of women healers into malevolent witches." --Carl Levy, professor in the Department of Politics and International Relations at Goldsmiths, University of London
"Not many books are truly 'essential reading, ' but if you think of yourself as an anarchist you cannot afford to miss this. This is one critique we need to be talking about." --Christopher Scott Thompson, https: //abeautifulresistance.org/site/2018/12/12/occult-features-of-anarchism-by-erica-lagalisse-a-review

"Lagalisse excavates the theological, spiritual roots of Anarchism to identify some of the contemporary shortcomings of left activism. Engrossing, enlightening, and often surprising, the book delights and dazzles as it ruminates on a stunning array of topics from gender and intersectionality to secret societies, the occult, and conspiracy." --Gabriella Coleman, professor of anthropology at McGill University, author of Hacker, Hoaxer, Whistleblower, Spy: The Many Faces of Anonymous

"Fun and fascinating, playful and serious at once, Occult Features of Anarchism reveals further why and how the social worlds of the Left often carelessly reproduce and even further entrench mainstream forms of gendered power." --Sally Cole, professor of anthropology emerita, Concordia University, author of Contesting Publics: Feminism, Activism, Ethnography

"Lagalisse is one of those exceptional scholars who manages to follow a clear line of argument while also dropping profound commentaries on a variety of other topics as she goes. She provides, almost in passing, a brilliant and ruthlessly incisive take-down of the performative allyship of academic elites toward persons of oppressed identities (this, she says, all too often 'consist[s] in valorizing one's self vis-à-vis one's peers... instead of constituting tangible benefits for the persons with whom one is "allied"'). There's also an excellent critique of performative politics--'good politics'--and its racist consequences. Identity-policing and call-out culture is more often than not a matter of semantics, where the people being called out are not necessarily trying to be racist or oppressive, but simply lack the sophisticated verbiage of the people doing the calling out. 'As a consequence, ' she writes, 'articulate students of Edward Said or well-spoken sexists may enjoy "good politics" simply because they cite and reiterate their bourgeois self-detachment ("reflexivity") by way of choicefully framed speeches.'" --Hans Rollmann, https: //www.popmatters.com/occult-features-anarchism-erica-lagalisse-2635333993.html

"Occult Features of Anarchism is a rich work that forces readers to confront questions about the nature of anarchism, conspiracy theories and knowledge." --Bethan Johnson, LSE Review of Books

Erica Lagalisse is an anthropologist, a writer, and a postdoctoral fellow at the International Inequalities Institute of the London School of Economics and Political Science. Barbara Ehrenreich is the author of 14 books, including the bestselling Nickel and Dimed and Bait and Switch.

Book Description PM Press, United States, 2019. Paperback. Condition: New. Language: English. Brand new Book. In the 19th century anarchists were accused of conspiracy by governments afraid of revolution, but in the current century, various "conspiracy theories" suggest that anarchists are controlled by government itself. The Illuminati were a network of intellectuals who argued for self-government and against private property, yet the public is now often told that they were (and are) the very group that controls governments around the world. Intervening in such misinformation, Lagalisse works with primary and secondary sources to set straight the history of the Left and illustrate the actual relationship between revolutionism, pantheistic occult philosophy, and the clandestine fraternity. Exploring hidden correspondences between anarchism, Renaissance magic, and New Age movements, Lagalisse also advances critical scholarship regarding leftist attachments to secular politics and the influence clandestine masculine spheres continue to have on contemporary anarchist understandings of power and politics as oppressively male. Seller Inventory # ABZ9781629635798

Book Description Paperback. Condition: New. Paperback. Studying anarchism as a historical object, Occult Features of Anarchism shows how the development of leftist theory and practice within clandestine masculine public spheres continues to in.Shipping may be from multiple locations in the US or from the UK, depending on stock availability. 128 pages. 0.140. Seller Inventory # 9781629635798