Items related to Their Yesterdays 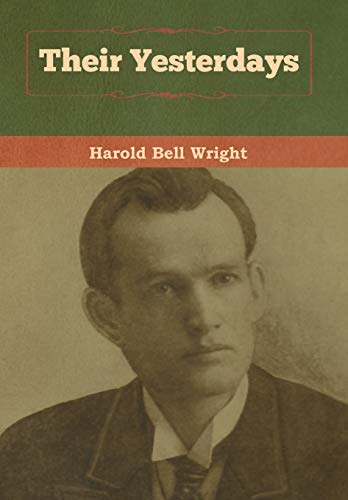 Book Description Hardback. Condition: New. Language: English. Brand new Book. Harold Bell Wright (May 4, 1872 - May 24, 1944) was a best-selling American writer of fiction, essays, and nonfiction. Although mostly forgotten or ignored after the middle of the 20th century, he is said to have been the first American writer to sell a million copies of a novel and the first to make $1 million from writing fiction. Between 1902 and 1942 Wright wrote 19 books, several stage plays, and many magazine articles. More than 15 movies were made or claimed to be made from Wright's stories, including Gary Cooper's first major movie, The Winning of Barbara Worth (1926) and the John Wayne film The Shepherd of the Hills (1941).In 1902, while pastoring the Christian Church in Pittsburg, Kansas, he wrote a melodramatic story, entitled That Printer of Udell's, which he intended to read to his congregation, one chapter per week, at successive Sunday night meetings. But before he read it to his congregation, the story was published in serial form in The Christian Century, his denomination's official journal. Wright despised the magazine version so much that he "hid the poor mutilated corpse in the bottom of the least used drawer of my desk and moved on to other things" (To My Sons, p. 213). But parishioners enjoyed the story so much that they encouraged him to publish it in book form, which he did. But it was Wright's second novel, The Shepherd of the Hills, published in 1907 and set in Branson, Missouri, that established him as a best-selling author. That book also attracted a growing stream of tourists to the little-known town of Branson, resulting in its becoming a major tourist destination.In 1905 Wright accepted the position of pastor at the Christian Church in Lebanon, Missouri. Wright remained there until 1907 when he accepted another pastoral position in California. In that same year, after the success of The Shepherd of the Hills (his first book to sell one million copies), Wright resigned as pastor of the Redlands, California, Christian Church, moved to a ranch near El Centro, California, and devoted the rest of his life to writing popular stories. In 1911, he published his most popular book, The Winning of Barbara Worth, a historical novel set in the Imperial Valley of southeastern California.Wright was motivated to leave the ministry because he realized he could make more money writing fiction. In most of his novels, beginning with That Printer of Udell's, he attacked the hypocrisy and impractical nature of popular churches. To Wright, hard work, integrity and concrete efforts to aid people in need were far more important than church doctrines or sermons.Wright never responded to his critics, except to say that he never intended to create great literature, only to minister to ordinary people. ). Seller Inventory # LHB9781618958174