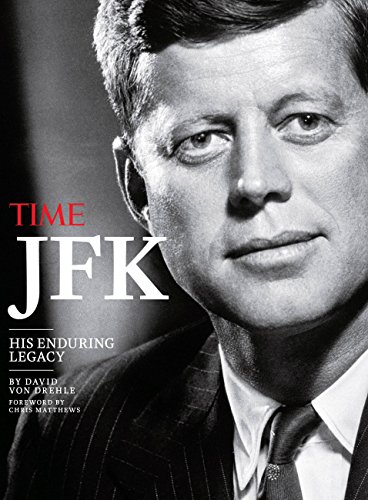 Five decades after President John F. Kennedy opened a soaring chapter in American life by calling for a New Frontier, TIME explores the life and legacy of an inspiring leader whose presidency was cut short by an assassin's bullet. TIME takes the full measure of Kennedy's life and achievements, celebrates his lasting impact on the American scene and commemorates, indelibly, the bygone days of the early 1960s.

John F. Kennedy played many roles in his all-too-short life. He was a playboy who became a war hero, an athlete who fought against lifelong fragile health, an heir to riches who worked for the less fortunate. JFK was a visionary President who ignited the dreams of a generation: he founded the Peace Corps, challenged Americans to fly to the moon, supported the Civil Rights movement and faced down the Soviets in the Cuban Missile Crisis. With First Lady Jacqueline Kennedy, he presided over a White House that became the center of the nation's artistic, cultural and intellectual life. From Boston to the South Pacific, Hyannis Port to Washington, Camelot to Dallas, join TIME to reconsider the myths, the magic and the legacy of JFK. The book features new interviews with Kennedy's friends, family and colleagues; seldom-seen photos from the archives of TIME and LIFE; and a special introduction by sister-in-law Ethel Kennedy.

The Editors of TIME