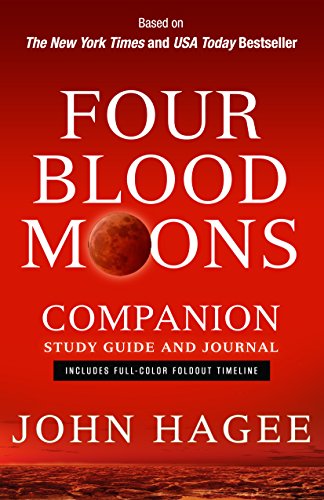 Over the last 500 years, blood-red moons have fallen on the first day of Passover three separate times. These occurrences were connected to some of the most significant days in Jewish history: 1492 (the final year of the Spanish Inquisition when Jews were expelled from Spain), 1948 (statehood for Israel and the War of Independence) and 1967 (the Six-Day War). The next series of four blood moons occurs at Passover and Sukkot in 2014 and 2015.In this devotional study guide, Pastor Hagee challenges readers to further explore the meaning behind blood moons, understand why Christians must recognize these signs that God refers to in Scripture, and absorb their prophetic significance. Ideal for individuals and groups, this devotional study guide combines questions and reflective journaling for deeper meaning and life application.

John Hagee is the author of four New York Times bestsellers, as well as Jerusalem Countdown, which itself has sold over 1 million copies. He is the founder and senior pastor of Cornerstone Church in San Antonio, Texas, a nondenominational evangelical church with more than 20,000 active members, as well as the founder and president of John Hagee Ministries, which telecasts his radio and television teachings throughout America and in 249 nations worldwide. Hagee is also the founder and national chairman of Christians United for Israel, a grassroots national association with over one million members to date.

Book Description Worthy Publishing, 2014. Paperback. Condition: New. FREE delivery upgrade - If you live in the USA this item will arrive in 4 to 6 business days when you choose the lowest cost shipping method when checking out. Excellent condition. Interior is tight, bright and clean; no underlining, notes or highlighting. Binding is smooth and solid. Paperback cover is clean and sticker free. 100% Satisfaction Guaranteed. All items are carefully enclosed with bubble wrap. We ship promptly and worldwide via US Post and will email you a tracking number. Seller Inventory # SKU0056678