Items related to Second Day of the Renaissance, The The Sixth Commissario... 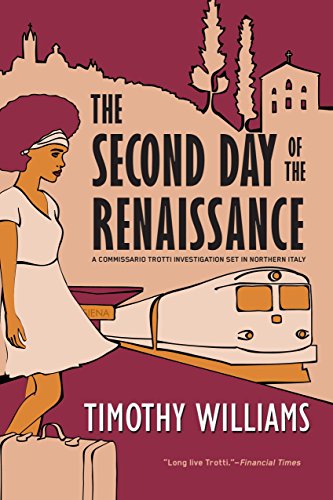 After decades as a Commissario, Piero Trotti has retired. But his newfound peace is brief. An old friend calls him to Siena to give him urgent news: a known hit man has returned to Italy to kill Trotti. The former inspector must admit that he isn't entirely undeserving, as his mistaken accusations and failed gambles have cost innocent lives in the course of his investigations. Though Trotti carries the burden of these deaths with him each day, someone else has appeared to enact his own, long-awaited retribution...

Praise for The Second Day of the Renaissance

"It's hard to resist Williams as he unfolds his tale in tiny, deliciously wry narrative nuggets--100 titled chapters of puckish literary pointillism."
--Kirkus Reviews "Like Henning Mankell's The Troubled Man, this leisurely paced novel is as much about an aging detective pondering his own mortality as it is about solving a crime . . . Williams successfully draws us into Trotti's mind as he vacillates between despair and defiance."
--Booklist "Readers of this cerebral, melancholy tale will hope to see more of the conflicted Trotti, a man heavy with regret, who, when confronted with the possibility of death, fervently wishes for it, yet also desires to live."
--Publishers Weekly Praise for the Commissario Trotti Investigations "[Williams] capture[s] the Northern Italian milieu with particular insight."
--The Washington Post "Splendidly realized . . . Williams's pared down descriptions and staccato dialogue are a constant pleasure."
--Financial Times "Commissario Trotti is clever and tough . . . Offers insights into the Italian power structure, which is far more interesting than it is stable."
--Newsday "[Williams's] simple but stylish dialogue driven prose is convincingly Continental, his plotting impeccable."
--Time Out "Wake up and smell the grappa . . . A chilling education, a scalpel-sharp exploration of Italy's body politic. Timothy Williams knows the ABC of corruption--Andreotti, Berlusconi, Craxi."
--Ian Rankin About the Author:

CWA award-winning author Timothy Williams has written six crime novels set in Italy featuring Commissario Piero Trotti, as two novels set in the French Caribbean, Another Sun and The Honest Folk of Guadeloupe. In 2011, The Observer placed him among the ten best modern European crime novelists. Born in London and educated at St. Andrews, Williams has taught at the universities of Poitiers in France, Bari and Pavia in Italy, and at Jassy in Romania. He taught for thirty in the French West Indies but now spends his time between Europe and Africa. For more information, visit his website: https: //www.facebook.com/thdw.co.uk.

The Second Day Of The Renaissance: The Sixth Commissario Trotti Investigation Set in Northern Italy (Hardback)

Book Description Hardback. Condition: New. Language: English. Brand new Book. Timothy Williams was selected by The Observer as one of the "10 Best Modern European Crime Writers" for his series featuring Northern Italian police detective Piero Trotti. Now, 20 years after his last investigation, Trotti returns! After decades as a police detective in his Northern Italian hometown on the River Po, Commissario Piero Trotti has retired. But retirement brings him no respite. An old friend calls him to Siena to give him urgent news: a notorious hit man has returned to Italy to kill Trotti. The former inspector isn't surprised to learn of the vendetta against him; Trotti has plenty of skeletons in his closet. His mistaken accusations and failed gambles have cost innocent lives in the course of his investigations. Though Trotti carries the burden of these deaths with him each day, now someone else has appeared to enact his own, long-awaited retribution. Traveling across Italy to escape his pursuer, Trotti revisits his own past and searches for clues to the cold-case murder of Valerio Gracchi, a leftist radical who became a national media sensation. But even the right answers may not save Trotti and his loved ones. Seller Inventory # AAT9781616957209

The Second Day of the Renaissance

The Second Day Of The Renaissance: The Sixth Commissario Trotti Investigation Set in Northern Italy