Items related to Dinosaurs--The Grand Tour: Everything Worth Knowing... 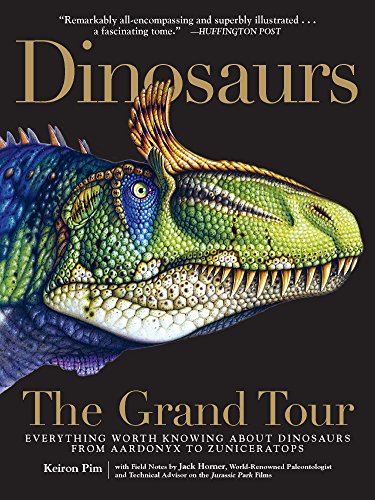 From Aardonyx to Zuniceratops--A Dino-Mite Gathering of All the Dinosaurs (More Than 300!) Worth Knowing About

We live in a golden age of paleontological discovery--the perfect time to dig in to the spectacular world of dinosaurs. From Aardonyx, a lumbering beast that formed a link between two and four-legged dinosaurs, to Zuniceratops, who boasted a deadly pair of horns, Dinosaurs--The Grand Tour details everything worth knowing about every important dinosaur that scientists know about--more than 300 in all.

In Dinosaurs you'll learn all the gory details--about geology, anatomy, evolution, astronomy, and even Native American and Chinese mythology. Stories of harrowing paleontological expeditions conjure the thrills of history's most famous dinosaur hunters. Highlights of recent research reveal what's going on in the world of dinosaurs today, including scientists' recent discovery of pigments embedded in dinosaur fossils that shed light, for the first time, on dinosaurs' true coloration. Illustrations on virtually every page bring these prehistoric creatures to life in all their razor-sharp, long-necked, spiny, scaly glory.

And for readers inspired to test their dino-expertise in the field, renowned paleontologist Jack Horner's field notes will help enthusiasts set out on their own expeditions. Track down dinosaur footprints at Horner's recommended sites, head out on a cross-country dinosaur road trip using Horner's list of top North American dinosaurs as your map, and learn what it's like to be a leading paleontologist who's been part of some of the most sensational dinosaur discoveries ever--and how you can get involved, too!

"Remarkably all-encompassing and superbly illustrated . . . A fascinating tome that will appeal to children and adults."--Huffington Post

"If there is one book you should give as a gift to any dinosaur fan . . . this is it."--Staten Island Advance

"Dramatic illustrations and silhouettes of the dinosaur accompany each profile...A good, inexpensive choice for those who want the most up-to-date, comprehensive information on dinosaurs."--Booklist

"If you've got a kid who's wild about dinosaurs, this is the book you need to get."--GeekDad blog

As a small boy in the early 1980s nothing seemed more exciting to Keiron Pim than a visit to London s renowned Natural History Museum, where he would gaze up at the "Diplodocus "skeleton and later depart clutching some little dinosaur-related memento: an eraser shaped like "Stegosaurus," a lurid poster of a Jurassic scene, or a book crammed with dino-facts. It would have blown his four-year-old mind to know that thirty years later a book on dinosaurs would be his first publication. Keiron, married with three young daughters, is a writer and journalist now based in Norfolk, England.John Jack Horner is one of the world s foremost paleontologists, credited with finding the first dinosaur eggs in the Western Hemisphere, the first evidence of dinosaur colonial nesting, the first evidence of parental care among dinosaurs, and the first dinosaur embryos. He served as the inspiration for Paleontologist Dr. Alan Grant in Michael Crichton s "Jurassic Park, "and as the technical advisor on all of the "Jurassic Park "films. Horner is Curator of Paleontology at the Museum of the Rockies in Bozeman, Montana, and Regents Professor of Paleontology at Montana State University."

1. Dinosaurs The Grand Tour: Everything Worth Knowing About Dinosaurs From Aardonyx to Zuniceratops

5. Dinosaurs - The Grand Tour: Everything Worth Knowing About Dinosaurs from Aardonyx to Zuniceratops