Items related to Hue 1968: A Turning Point of the American War in Vietnam

Bowden, Mark Hue 1968: A Turning Point of the American War in Vietnam

Hue 1968: A Turning Point of the American War in Vietnam 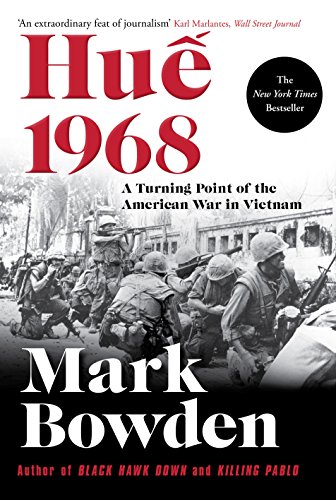 By January 1968 the fighting in Vietnam seemed to be at a stalemate. Yet General William Westmoreland, commander of American forces, announced a new phase of the war in which 'the end begins to come into view.' The North Vietnamese had different ideas. In mid-1967, the leadership in Hanoi had started planning an offensive intended to win the war in a single stroke. Part military action and part popular uprising, the Tet Offensive included attacks across South Vietnam, but the most dramatic and successful would be the capture of Hue, the country's cultural capital. At 2:30 a.m. on January 31, 10,000 National Liberation Front troops descended from hidden camps and surged across the city of 140,000. By morning, all of Hue was in Front hands save for two small military outposts.

The commanders in country and politicians in Washington refused to believe the size and scope of the Front's presence. After several futile and deadly days, Lieutenant Colonel Ernie Cheatham would finally come up with a strategy to retake the city, block by block and building by building, in some of the most intense urban combat since World War II.

With unprecedented access to war archives in the U.S. and Vietnam and interviews with participants from both sides, Bowden narrates each stage of this crucial battle through multiple points of view. Played out over twenty-four days of terrible fighting and ultimately costing 10,000 combatant and civilian lives, the Battle of Hue was by far the bloodiest of the entire war. When it ended, the American debate was never again about winning, only about how to leave. In Hue 1968, Bowden masterfully reconstructs this pivotal moment in the American war in Vietnam.

The book is a mighty piece of work, and as fine an account of a battle as you will likely read. Hell, I wish I had written it., The Times

Hue 1968 is a meticulous and vivid retelling of an important battle., New York Times

Meticulously analytical... excellent... gives us the clearest picture yet of what happened in Vietnam, USA Today

An extraordinary feat of journalism...Here the best and worst of human behaviour is exposed in glaring light. -- Karl Marlantes, Wall Street Journal

Hue 1968 will tell you all you need to know about the most deadly urban fighting involving US troops in Vietnam...a heck of a story - and, depending on your perspective - a disturbing one... the bulk of the evidence in his book comes from interviews with eyewitnesses. The pains he took to amass this material are truly remarkable, and he is to be congratulated for including all sides in his sweep., Times Literary Supplement

Bowden tells this story with a power and a wealth of detail that no previous history of this offensive has approached - this is another instantly-recognizable classic of military history., Christian Science Monitor

Hue 1968 is, by far, the most comprehensive (and balanced) coverage on this battle I've seen. -- Brigadier General Mike Downs, USMC (ret.)

Hue 1968 unravels one of the great mysteries of our time... Did the Battle of Hue end up as a victory or defeat? The answer depends on who's asking and who's telling. Bowden takes on both roles and does it well. -- Lieutenant Colonel Charles A. Krohn (ret.), author of THE LOST BATTALION OF TET

This book is a tragic tale of misunderstanding but also one of great heroism and sacrifice by those who fought in the streets of Hue and in the nearby rice paddies and villages. -- Brigadier General Howard T. Prince II, USMC (ret.), Commanding Officer, Bravo Company, 5/7 Cavalry, 1968

There is no more complete, accurate and detailed book. It reads like a novel even though is it made up almost exclusively of very personal accounts. -- John Wear, president of the USMC Vietnam Tankers Association

Mark Bowden is the author of thirteen books, including the #1 New York Times bestseller Black Hawk Down and the Sunday Times bestseller Killing Pablo. He reported at the Philadelphia Inquirer for twenty years and now writes for the Atlantic, Vanity Fair and other magazines. He is also the writer in residence at the University of Delaware.

Book Description Grove Press / Atlantic Monthly Press. Paperback / softback. Condition: New. New copy - Usually dispatched within 4 working days. Bowden's most ambitious work yet, Hue 1968 is the story of the centrepiece of the Tet Offensive and a turning point in the American war in Vietnam. Seller Inventory # B9781611855081