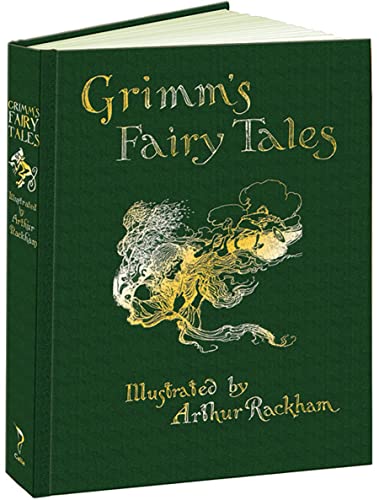 This Calla Edition of fairy tales by the Brothers Grimm is drawn from the mammoth collection first published in 1909 and illustrated by Arthur Rackham. His 40 full-color plates, plus innumerable black-and-white spot elements, get sensitive treatment in a design that retains the best features of the original, including the ornate gilt stamping on the case.

Arthur Rackham (1867–1939) was an English artist and a leading figure in the early 20th century's Golden Age of Illustration. He interpreted scenes from fairy tales, opera, and Shakespearean comedy with whimsical and romantic images that continue to enchant children and adults alike.

Born in Dublin in 1872, Rene Bull began working as an illustrator while still in his teens. His travels to the Middle East endowed him with an intimate knowledge of Arab costume and customs, as reflected in his greatest works, Arabian Nights and Omar Khayyam's Rubaiyat.

Twin brothers Edward and Maurice Detmold were born in 1883 and made their publishing debut at the age of 16 with Pictures from Birdland. Both excelled at depictions of animals, and they worked in collaboration until Maurice's tragic early death.