Items related to From Ritual to Romance: History of the Holy Grail Legend...

From Ritual to Romance: History of the Holy Grail Legend (Forgotten Books) 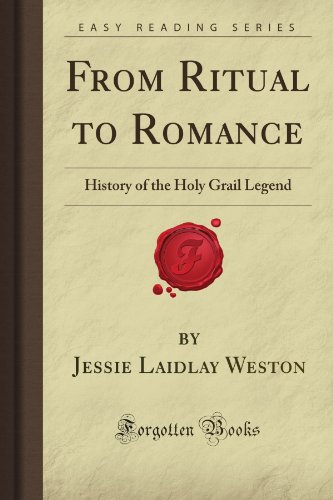 At the advanced age of 70, Jessie Weston, who had spent decades immersed in the Arthurian canon, wrote this relatively short book to attempt to explain the roots of the legend of the Holy Grail. She enumerates the seemingly inexplicable elements of the quest--The Fisher King, The Wasteland, the Chapel Perilous, and the Grail Cup itself--and ties them to the symbols and initiatory rites of the ancient mystery religions. She also attempts to identify the author and locality of the tale. Her thesis still inspires heated controversy among academics. It is also claimed that T.S. Elliot's The Wasteland was based on this book, although this has been questioned.

One thing is certain; although this book is one of the bullet-points of 20th century culture, probably very few have read and understood it in its entirety. Written in a formal academic style, with extensive passages in a dozen different languages, From Ritual to Romance is frankly a tough, but ultimately very rewarding read. (Quote from sacred-texts.com)

Her best-known work is From Ritual to Romance (1920); this book is now available as an online text, as are others of hers. In it she brought to bear an analysis harking back to James Frazer on the Grail legend, arguing for origins earlier than the Christian or Celtic sources conventionally discussed at the time. It was cited by T. S. Eliot in his notes to The Waste Land. (He later claimed that the notes as a whole were ironic in intention, and the extent of Weston's actual influence on the poem is unclear. Eliot also indicated that the notes were requested by the publisher t

1. From Ritual to Romance: History of the Holy Grail Legend (Forgotten Books)