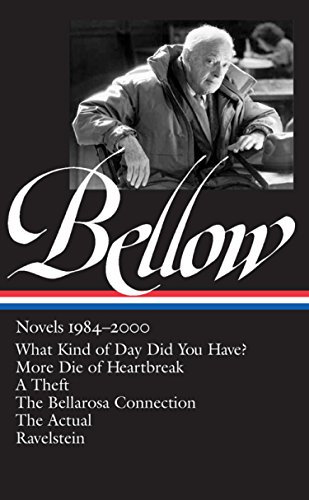 In the last stage of his unparalleled career - which included winning the Nobel Prize in Literature in 1976 - Saul Bellow remained an uproarious comic storyteller, a provocative thinker deeply engaged with the intellectual cross-currents of his time, and a magnificent prose stylist. Gathered here are four shorter works - What Kind Of Day Did You Have? (1984), A Theft (1989), The Bellarosa Connection (1989), and The Actual (1997) - along with More Die of Heartbreak (1987) and Bellow's extraordinary valedictory, Ravelstein.

Saul Bellow was born of Russian Jewish parents in Lachine, Quebec in 1915, and was raised in Chicago. His works include The Adventures of Augie March, which went on to win the National Book Award for fiction in 1954, Seize the Day (1956); Henderson the Rain King (1959); and Humboldt's Gift (1975), which won the Pulitzer Prize. In 1976 Bellow was awarded the Nobel Prize for Literature "for the human understanding and subtle analysis of contemporary culture that are combined in his work." In 2003, he became just the second living writer to have his works published in the Library of America series. He died in 2005.

James Wood, editor, is a staff writer at The New Yorker and author of The Irresponsible Self: On Laughter and the Novel (2004), The Broken Estate: Essays on Literature and Belief(1999), and the novel The Book Against God (2003).