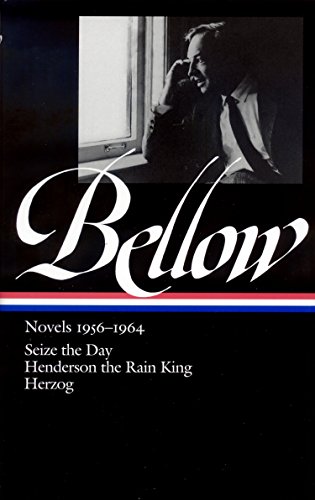 Passionate, insightful, often funny, and exhibiting a linguistic richness few writers have equaled, the novels of Saul Bellow are among the defining achievements of postwar American literature. The Library of America volume Novels 1956-1964 opens with Seize the Day, a tightly wrought novella that, unfolding over the course of a single devastating day, explores the desperate predicament of the failed actor and salesman Tommy Wilhelm. The austere psychological portraiture of Seize the Day is followed by an altogether different book, Henderson the Rain King, the ebullient tale of the irresistible eccentric Eugene Henderson, best characterized by his primal mantra "I want! I want!" Beneath the novel's comic surface lies an affecting parable of one man's quest to know himself and come to terms with morality; like Don Quixote, Henderson is, as Bellow later described him, "an absurd seeker of high qualities."

Henderson's irrepressible vitality is matched by that of Moses Herzog, the eponymous hero of Bellow's best-selling 1964 novel. His wife having abandoned him for his best friend, Herzog is on the verge of mental collapse and has embarked on a furious letter-writing campaign as an outlet for his all-consuming rage. Bellow's bravura performance in Herzog launched a new phase of his career, as literary acclaim was now joined by a receptive mass audience in America. LIBRARY OF AMERICA is an independent nonprofit cultural organization founded in 1979 to preserve our nation's literary heritage by publishing, and keeping permanently in print, America's best and most significant writing. The Library of America series includes more than 300 volumes to date, authoritative editions that average 1,000 pages in length, feature cloth covers, sewn bindings, and ribbon markers, and are printed on premium acid-free paper that will last for centuries.

"It may be heretical, or just foolish, for a book review editor to admit it, but there are times when criticism is beside the point. This was brought home to me recently when I read The Library of America's new edition of Saul Bellow's major fiction from the 1950s and 60s, a volume of nearly 800 pages that includes Seize the Day, Henderson the Rain King, and Herzog.... They collectively yield a vision of the universe as apprehended by a being of higher intelligence who is touched also with a rare depth of feeling." --The New York Times Book Review

Saul Bellow was born of Russian Jewish parents in Lachine, Quebec in 1915, and was raised in Chicago. His works include The Adventures of Augie March, which went on to win the National Book Award for fiction in 1954, Seize the Day (1956); Henderson the Rain King (1959); and Humboldt's Gift (1975), which won the Pulitzer Prize. In 1976 Bellow was awarded the Nobel Prize for Literature "for the human understanding and subtle analysis of contemporary culture that are combined in his work." In 2003, he became just the second living writer to have his works published in the Library of America series. He died in 2005.

James Wood, editor, is a staff writer at The New Yorker and author of The Irresponsible Self: On Laughter and the Novel (2004), The Broken Estate: Essays on Literature and Belief(1999), and the novel The Book Against God (2003).