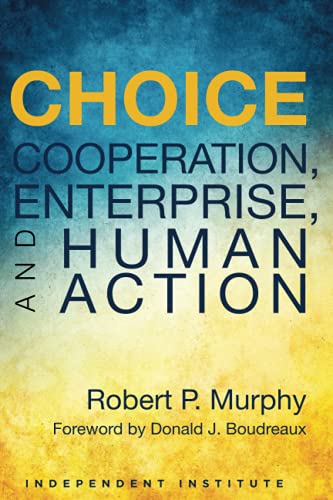 Human Action - a treatise on laissez-faire capitalism by Ludwig von Mises is a historically important and classic publication on economics, and yet it can be an intimidating work due to its length and formal style. Choice: Cooperation, Enterprise, and Human Action, however, skillfully relays the main insights from Human Action in a style that will resonate with modern readers. The book assumes no prior knowledge in economics or other fields, and, when necessary, it provides the historical and scholarly context necessary to explain the contribution Mises makes on a particular issue. To faithfully reproduce the material in Human Action, this work mirrors its basic structure, providing readers with an enjoyable and educational introduction to the lifes work of one of history's most important economists.

Robert P. Murphy is a visiting assistant professor of economics at Hillsdale College, a visiting scholar at New York University, and a senior fellow in business and economic studies at the Pacific Research Institute. He is the author of several books, including How Privatized Banking Really Works, Lessons for the Young Economist, The Politically Incorrect Guide to Capitalism, and Study Guide for Ludwig von Mises' Human Action. His articles have appeared in numerous publications, including Economic Affairs, Forbes, Investor's Business Daily, and the Los Angeles Times and he has appeared on CNBC, C-SPAN, Fox Business Network, and other television and radio networks and programs.

Donald J. Boudreaux is research fellow at the Independent Institute, an associate editor of the Independent Review, and the chairman and professor in the department of economics at George Mason University. He has been president of the Foundation for Economic Education and associate professor of legal studies and economics at Clemson University. His articles have appeared in the American Spectator, Investor's Business Daily, Journal of Commerce, the Wall Street Journal, and the Washington Times, and several scholarly journals such as Antitrust Bulletin; the Journal of Money, Credit, and Banking; Southern Economic Journal, and the Supreme Court Economic Review. He lives in Fairfax, Virginia, USA.