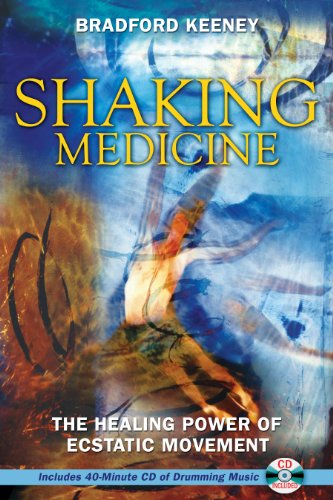 "Dr. Keeney's work marks the beginning of an awakening of the universal life force that is accessible to everyone. I have personally experienced his method of moving the life force in my own body--circulating it up and down my spine, passing it through my fingertips, and feeling it tingling the tips of my toes. It is time for each of us to become acquainted with this energizing force."--Dr. Robert Fulford, author of Dr. Fulford's Touch of Life: Aligning Body, Mind, and Spirit to

"I had a personal experience of Brad's shaking power. . . . He placed one of his hands on my upper back and the other opposite on my upper chest. He began to shake vigorously, and apparently involuntarily, throughout his entire body. His face, shoulders, torso, and feet were vibrating with some invisible power, like a wave that was continuously cresting in his body and crashing and rippling in his fingertips. I felt the trembling power pass through me. . . . While receiving this beautiful 'gift, ' I was transported to the Kalahari. I saw the tribal people with whom he had danced; I viewed their villages and landscape. I was in Africa as truly as if I had opened my eyes and found myself physically there."--Kenneth Cohen, author of The Way of Qigong: The Art and Science of Chinese Energy Healing

"Indigenous wisdom knows that 'to live is to move.' To awaken from our deep slumber means our bones will be rattled, and we'll be shaken to the core. In this invitation into very ancient medicine, we hear the voices of the elders issuing a timely wake-up call, accessible to the modern world through Bradford Keeney, their brother and representative in the West."--Malidoma Somé, Ph.D., elder, teacher, and author of Healing Wisdom of Africa and Of Water and t

"Bradford Keeney is an authentic shaman who, in his ceremonial practice, answers the question: What would happen if you gave a university professor a kind heart and a limitless infusion of spiritual power?"--Stephen and Robin Larsen, authors of A Fire in the Mind: The Life of Joseph Campbell

"I felt like I was floating and wanted to move my body with speed and precision. All of my senses were intensified. I recognized this condition as being similar to the ki activation that I had learned to utilize in aikido training. The difference was that the intensity of this energy was magnitudes beyond what I had previously experienced; it was beyond what I'd ever imagined."--Don Wright, former teacher of Ericksonian hypnotherapy at the Esalen Institute

"The experience I had in Brad Keeney's ceremony was very important--his hands irradiated light in my head."--Dr. Pierre Weil, author of The Art of Living in Peace: Towards a New Peace Consciousness, founder of

"Another way to open the self to physical, mental, emotional and spiritual flow is through movement. . . . However it comes, one is forever changed . . . "--ForeWord Magazine, Jan/Feb 2008

INDIGENOUS CULTURES / HEALING "Indigenous wisdom knows that 'to live is to move.' To awaken from our deep slumber means our bones will be rattled, and we'll be shaken to the core. In this invitation into very ancient medicine, we hear the voices of the elders issuing a timely wake-up call, accessible to the modern world through Bradford Keeney, their brother and representative in the West." --Malidoma Some, Ph.D., elder, teacher, and author of Healing Wisdom of Africa and Of Water and the Spirit Shaking Medicine reintroduces the oldest medicine on Earth--the ecstatic shaking of the human body. Most people's worst fear is losing control--of their circumstances, of their emotions, and especially of their bodies. Yet in order to achieve the transcendent state necessary to experience deep healing, we must surrender control. Examining cultural traditions from around the world where shaking has been used as a form of healing--from the Shakers and Quakers of New England to the shaking medicine of Japan, India, the Caribbean, the Kalahari, and the Indian Shakers of the Pacific Northwest--Bradford Keeney shows how shaking can bring profound therapeutic benefits. Keeney investigates the full spectrum of the healing cycle that occurs when moving from ecstatic arousal to deep trance relaxation. He explains how the alternating movement produced while shaking brings all the body's energetic systems into balance. He includes practical exercises in how to shake for physical therapeutic benefit, and he shows how these techniques lead ultimately to the shaking medicine that both enables and enhances spiritual attunement. The book also includes a 40-minute CD of ecstatic drumming music to use while shaking. BRADFORD KEENEY, Ph.D., is an internationally renowned scholar, therapist, and shaman who has led expeditions throughout the world to study cultural healing practices. He is an Honorary Senior Research Fellow at the Rock Art Research Institute, University of Witwatersrand, Johannesburg, South Africa, and is the author of Bushman Shaman: Awakening the Spirit through Ecstatic Dance, Shamanic Christianity: The Direct Experience of Mystical Communion, and the editor of the Profiles of Healing series.

Book Description Paperback. Condition: New. Paperback. A revolutionary call to reawaken our bodies and minds to powerful healing through ecstatic movement - Shows how shaking medicine is one of the oldest healing modalities?practiced by .Shipping may be from multiple locations in the US or from the UK, depending on stock availability. 276 pages. 0.404. Seller Inventory # 9781594771491