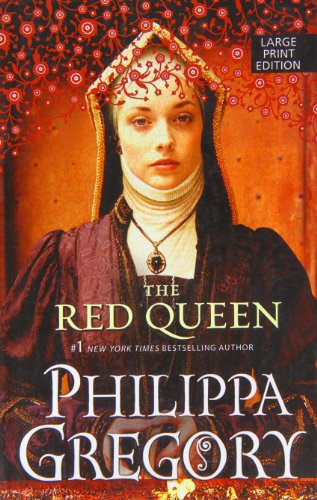 Determined to see her son Henry on the throne of England, pious Margaret Beaufort arranges politically advantageous marriages, sends her son out of the country for his safety and lays secret plans for a battle between the houses of York and Lancaster. (historical fiction). By the best-selling author of The White Queen.

'This interweaving of the personal and the historical in a way that is fluid and entirely believable is, of course, why one reads Gregory in the first place. But the backbone of this book is the manipulation of her central character, the way in which Gregory successfully guides her from hero to antihero, keeping her compelling all along. Once that job is done, and Margaret has gone truly bad, the action breads into a proper gallop. There is more bitching, double-dealing and downright skulduggery than in an entire series of The Thick Of It, and a splendidly bloody climax to boot. Delightful escapism'

'The narrative has both drive and immediacy which, combined with the meticulous research characteristic of all Philippa Gregory's books, bring the 15th century alive... The Red Queen is a vivid and compelling evocation of a turbulent period'

'This is a vivid recreation of an unsympathetic and ruthless manipulator...compulsive tale of dynastic dev

Philippa Gregory was an established historian and writer when she discovered her interest in the Tudor period and wrote the internationally bestselling novel The Other Boleyn Girl. Her Cousin's War novels, reaching their dramatic conclusion with The King's Curse, were the basis for the highly successful BBC series, The White Queen. Philippa's other great interest is the charity that she founded over twenty years ago: Gardens for the Gambia. She has raised funds and paid for over 200 wells in the primary schools of this poor African country. Philippa is a former student of Sussex University and a PhD and Alumna of the Year 2009 of Edinburgh University. In 2016, she was presented with the Outstanding Contribution to Historical Fiction Award by the Historical Writers' Association. Her love for history and commitment to historical accuracy are the hallmarks of her writing. Philippa lives with her family on a small farm in Yorkshire and welcomes visitors to her site www.PhilippaGregory.com

Gareth Armstrong combines the careers of actor, director and voice artist. He has worked in the West End, with the RSC, and toured worldwide with solo plays of his own devising. Gareth has recorded many audiobooks, and has narrated television features and documentaries.

Book Description Condition: Good. Large Print. Shows some signs of wear, and may have some markings on the inside. Seller Inventory # 6544346-6

Book Description Large Print Press, 2011. Condition: Good. A+ Customer service! Satisfaction Guaranteed! Book is in Used-Good condition. Pages and cover are clean and intact. Used items may not include supplementary materials such as CDs or access codes. May show signs of minor shelf wear and contain limited notes and highlighting. Seller Inventory # 1594134308-2-4