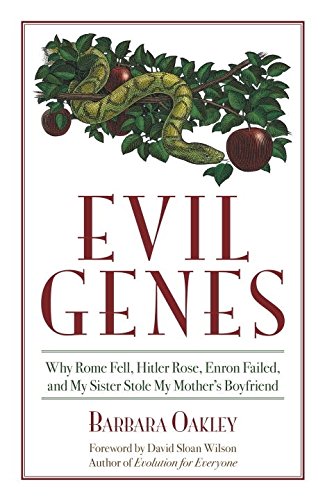 Have you ever heard of a person who left you wondering, "How could someone be so twisted? So evil?" Prompted by clues in her sister's diary after her mysterious death, author Barbara Oakley takes the reader inside the head of the kinds of malevolent people you know, perhaps all too well, but could never understand.
Starting with psychology as a frame of reference, Oakley uses cutting-edge images of the working brain to provide startling support for the idea that "evil" people act the way they do mainly as the result of a dysfunction. In fact, some deceitful, manipulative, and even sadistic behavior appears to be programmed genetically--suggesting that some people really are born to be bad.
Oakley links the latest findings of molecular research to a wide array of seemingly unrelated historical and current phenomena, from the harems of the Ottomans and the chummy jokes of "Uncle Joe" Stalin, to the remarkable memory of investor Warren Buffet. Throughout, she never loses sight of the personal cost of evil genes as she unravels the mystery surrounding her sister's enigmatic life--and death.
Evil Genes is a tour-de-force of popular science writing that brilliantly melds scientific research with intriguing family history and puts both a human and scientific face to evil.

"A fascinating scientific and personal exploration of the roots of evil, filled with human insight and telling detail."
--Steven Pinker, Johnstone Professor, Harvard University, and author of
The Language Instinct, How the Mind Works, and The Stuff of Thought
"'Scientific non-fiction' and 'page turner' aren't two phrases I'd expect in the same sentence, but for the remarkable Evil Genes, they fit."
--William A. Wulf, President Emeritus, National Academy of Engineering

Barbara Oakley, PhD (Rochester, MI), has been dubbed a female Indiana Jones--her writing combines worldwide adventure with solid research expertise. Among other adventures, she has worked as a Russian translator on Soviet trawlers in the Bering Sea, served as radio operator at the South Pole Station in Antarctica, and risen from Private to Regular Army Captain in the U.S. Army. Currently an associate professor of engineering at Oakland University in Michigan, Oakley is a recent vice president of the world's largest bioengineering society and holds a doctorate in the integrative discipline of systems engineering.