The Diary of a Rapist (New York Review Books Classics) 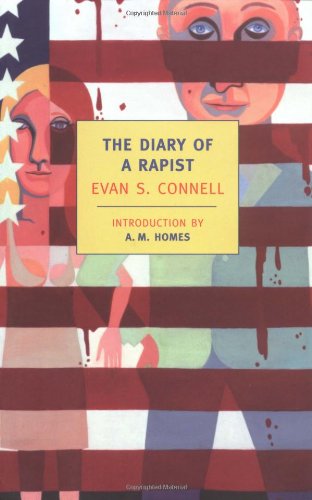 The 1960s: news of riots, war, unheard-of behavior, and rampant crime crowds the papers and the airwaves. Spurned by his wife at home and by superiors at work, Earl Summerfield hunkers down in his cramped San Francisco apartment and keeps a diary that is a scratched record of a world going to pieces. The words he overhears, the words he wants to say, swim in his head, turning into fantasies of ambition, love, and retribution. He is sorry for himself. He is angry at everyone. He takes to going out at night, slipping into other people's houses. He is looking for something, and he fixes on one woman.

Evan S. Connell is the author of eighteen books, including Deus Lo Volt!, Mrs. Bridge, Mr. Bridge, andSon of the Morning Star. He has received numerous awards, including the Los Angeles Times Book Prize, the Pushcart Prize, a Guggenheim fellowship, and an award in literature from the American Academy and Institute of Arts and Letters. He lives and works in Santa Fe, New Mexico.

A. M. Homes is the author of Things You Should Know, Los Angeles: People, Places, and the Castle on the Hill, Music for Torching, The End of Alice, Appendix A, In a Country of Mothers, The Safety of Objects, andJack. She has been the recipient of numerous awards, including a Center for Scholars and Writers Fellowship, a Guggenheim Fellowship, National Foundation for the Arts and New York Foundation for the Arts Fellowships, and The Deutscher Jugendliteraturpreis (German Youth Literature Prize).

1. The Diary of a Rapist (New York Review Books Classics)

2. The Diary of a Rapist (New York Review Books Classics)

4. The Diary of a Rapist (New York Review Books Classics)