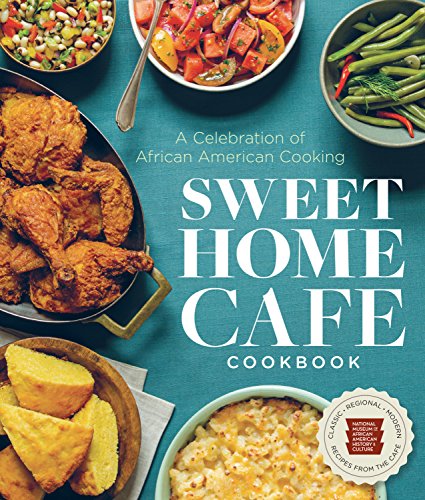 One of Food & Wine's Best Cookbooks Coming Out in Fall 2018 One of Booklist's Top 10 Food Books of 2018 One of Essence's Picks, October 2018 One of the best holiday 2018 gift books, Milwaukee Journal Sentinel and San Antonio Express-News

"Now recipes from the cafe and from black home and professional cooks, mostly traditional fare, have been collected in a cookbook. Keepers like mixed greens with baby turnips, biscuits, a somewhat-upmarket pimento cheese, fried croaker, and macaroni and cheese that's almost as easy as a packaged mix, are interspersed with history and sidebars about ingredients like okra, rice and peanuts." --New York Times "More than just a collection of recipes, Sweet Home Café Cookbook is a fascinating, thoughtful look at African American foodways, and how American food wouldn't be nearly as delicious and complex without the many contributions of African American cooks." --Southern Living "A love letter to African-American history, culture, and cuisine" --DCist "The recipes will open a cook's eyes to the diversity and richness of African-American cuisine." --Pittsburgh Post-Gazette

"Part of the phenomenal success and overflowing crowds at the Smithsonian Institution's National Museum of African American History has been the museum's Sweet Home Café, a venue for visitors from all backgrounds to share food together. The restaurant's menu includes all sorts of tasty dishes that connect both directly and indirectly with African-American culinary history. Expected soul food standards such as collards and potlikker, fried chicken, and sweet potato pie appear in this beautifully illustrated cookbook, and there are also supplemental ideas from other new world African traditions such as Jamaica's curried goat, Trinidad's Afro-Indian Trini doubles, and Guyanese oxtail pepper pot. African-American dishes born outside Dixie include New York City restaurateur Thomas Downing's celebrated oyster pan roast and frontier cowboys' son-of-gun stew. Befitting a cookbook produced by a museum, every recipe is carefully categorized by geographic origins, and a paragraph illuminates how each dish fits specifically within African-American cuisine's diverse history and origins." --Booklist, starred review "Lukas, supervising chef of the Smithsonian's National Museum of African American History and Culture's café, and Harris (The Martha's Vineyard Table) present the museum café's recipes in this fascinating cookbook. In these refined café dishes, Lukas and Harris deliver a delicious food history lesson for home cooks." --Publishers Weekly "Named for the cafe at the National Museum of African American History and Culture in Washington, DC, this cookbook collects classic and contemporary dishes inspired by historically African American foods. Chapter introductions and headnotes from culinary historian Jessica B. Harris (High on the Hog) provide social and historical context to 109 regional recipes such as potato salad, Louis Armstrong's red beans & rice, fried croaker with corn hush puppies, and banana pudding. There are also contributions from the cafe's supervising chef Albert Lukas and executive chef Jerome Grant. Collectively, they showcase the influence of African American cooking on the nation's foodways." --Library Journal "The recipes and stories in Sweet Home Café Cookbook are a wonderful and delicious way to bring history to life. This is a handbook for the culture that shaped American cuisine--cook it, treasure it, and celebrate it at your own table." --Carla Hall, Chef, Author "Sweet Home Café Cookbook is a heartwarming guided tour through African American culinary history that sparkles with all the fervor, dedication, and innovation of the Café itself. It is a new necessary favorite for my kitchen." --Michael W. Twitty, author of The Cooking Gene "This book is a celebration of--and an education in--the cuisine that helped forge the culture of this country. Delving into the history of dishes rooted in Africa, the Caribbean, and Europe, Sweet Home Café Cookbook sheds much-needed light on the unique and critical role African Americans played in shaping the way we eat today." --Marcus Samuelsson, chef and co-owner of Red Rooster Harlem About the Author:

Among the many treasures at the NATIONAL MUSEUM OF AFRICAN AMERICAN HISTORY AND CULTURE, which opened in September 2016, is its Sweet Home Café. Developed in thoughtful collaboration with Restaurant Associates, which focuses on creating extraordinary dining experiences in cultural institutions, the café showcases the rich culture and history of the African American people with traditional, authentic offerings as well as up-to-date dishes. JESSICA B. HARRIS is an award-winning culinary historian, author, and journalist and served as advisor to the museum as it developed the café. She is the author of twelve cookbooks, including High on the Hog: A Culinary Journey from Africa to America. Supervising Chef ALBERT LUKAS crafted the innovative and highly acclaimed café menu, which ties together food history, heritage ingredient sourcing, and modern tastes. Executive Chef JEROME GRANT oversees the café and develops inventive special meals for holiday and seasonal celebrations.

Book Description Hardcover. Condition: New. Hardcover. Since the 2016 opening of the National Museum of African American History and Culture, its Sweet Home Cafe has become a destination in its own right. Showcasing African American contributi.Shipping may be from multiple locations in the US or from the UK, depending on stock availability. 224 pages. 1.104. Seller Inventory # 9781588346407