Items related to The Medici Conspiracy: The Illicit Journey of Looted... 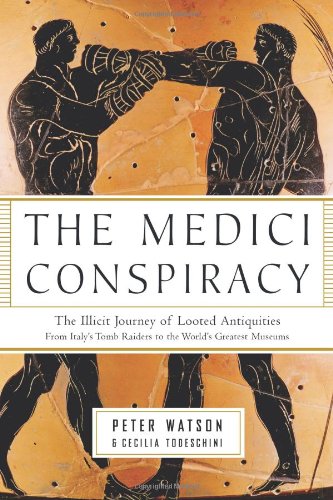 Oxbow says: What could easily be a work of fiction, this book reveals the scandals of the murky world of the illicit trading of ancient treasures. Peter Watson has earned himself a reputation for exposing scandals of the art world and here he explores and exposes the key figures and networks of the illegal trade in antiquities. This is a book about illegal excavation, smuggling, obscure provenances, uncertain acquisitions, million dollar deals, theft, art works going to ground and suddenly reappearing, phone tapping, police investigations, interrogations, trials and convictions. The name of Giacomo Medici features prominently in this study, although major institutions such as the Getty Museum, the British Museum, Sotheby's and the Metropolitan Museum of Art in New York are not exempt. In highlighting the sheer scale of illicit activities, Peter Watson joins Dr Chris Chippindale and Dr David Gill in concluding that this is a 'commercial cesspool of greed and vanity founded on loot and filled with deceit at every level' and in the final chapter he considers what the art world needs to do to clean up its act.

"Reading almost like a thriller at times, this is an exciting expose of a huge criminal trade." -- The Observer

"Written like a detective story ... the book is a thoroughly researched, pacey and accessible read." -- The Guardian, August 26, 2006

This true-life thriller completely exposes the network behind the illegal trade in ancient artefacts - and features a rich cast of rogues and some of the world's prestigious art institutions. The story begins, as stories do in all good thrillers, with a botched robbery and a police chase. Eight Apuleian vases of the fourth century BC are discovered in the swimming pool of a German-based art smuggler. More valuable than the recovery of the vases, however, is the discovery of the smuggler's card index detailing his deals and dealers. It reveals the existence of a web of tombaroli - tomb raiders - who steal classical artefacts, and a network of dealers and smugglers who spirit them out of Italy and into the hands of wealthy collectors and museums. Peter Watson, a former investigative journalist for "The Sunday Times", and author of two previous exposes of art world scandals, names the key figures in this network that has depleted Europe's classical artefacts. Among the loot are the irreplaceable and highly collectable vases of Euphronius, the equivalent in their field of the sculpture of Bernini, or the painting of Michelangelo.

The narrative leads to the doors of some major institutions including Sotheby's, the Getty Museum in LA, the Museum of Fine Arts in Boston and the Metropolitan Museum of Art in New York. Filled with great characters and human drama, "The Medici Conspiracy" authoritatively exposes another shameful round in one of the oldest games in the world: theft, smuggling and duplicitous dealing, all in the name of art.

Book Description PublicAffairs, 2006. Hardcover. Condition: New. This is a 1st Edition This is a hardcover book with dust jacket. Seller Inventory # mon0000003980

4. The Medici Conspiracy: The Illicit Journey of Looted Antiquities--From Italy's Tomb Raiders to the W