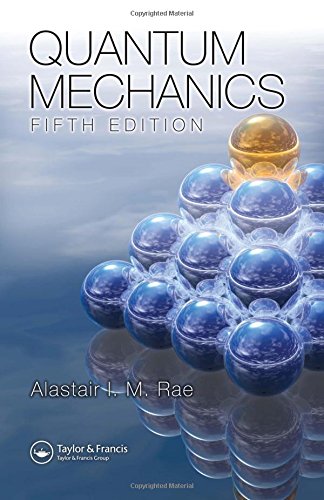 For more than 25 years, Alastair Rae's Quantum Mechanics has been one of the most highly regarded textbooks in this area. From elementary atomic physics and mathematics, to angular momentum and time dependence, to relativity and quantum computing, the text shows how cutting-edge research topics of quantum mechanics have been applied to various disciplines.

Retaining the clarity of its predecessors, this fifth edition presents revised and updated material throughout the text. It offers a clear exposition of fundamental ideas, additional worked examples of the application of quantum mechanics principles to a range of physical problems, and more information on modern quantum information technology. This text was one of the first to include a substantial discussion of the conceptual and philosophical implications of quantum mechanics, which has been revised and extended in the fifth edition. Other topics covered include one- and three-dimensional Schrödinger equations, angular momentum, time-independent perturbation theory, time dependence, scattering, and relativity.

Cementing its reputation as an exceptional introductory textbook, Quantum Mechanics, Fifth Edition fully covers the concepts of quantum mechanics taught in an undergraduate physics course and provides the foundation necessary for other specialized courses.

The addition of this new material has added a further dimension to what was already an excellent undergraduate text. The material is very well written, logically presented and illustrated with relevant contemporary examples wherever appropriate. . . In summary, this is a first-rate and relatively inexpensive book that would be an extremely useful text for anyone studying or teaching quantum physics at the tertiary level. It would also be a valuable refrence for postgraduate students needing a reasonably solid understanding of quantum mechanics for their research in other fields.

· UNDERGRADUATE TEXTBOOK
· New edition of best-selling textbook first published over 20 years ago, for a first course on quantum mechanics for physics, chemistry undergraduates.
· New chapters have been added on Relativistic Quantum Theory and Quantum Information; the latter includes discussions of quantum cryptography, quantum teleportation and quantum computing all of which have been front-line research topics during the last few years.
· The first edition was unusual for including a chapter on the conceptual and philosophical aspects of the subject. This has been largely re-written for the present edition so as to present an up-to-date account of work in this fascinating field.
· Earlier editions acquired a reputation for exceptional level of clarity of presentation. This has been maintained and extended in the present version with a more gradual introduction to the basic postulates and the inclusion of Dirac notation.
· Ideas are illustrated by up-to-date examples including scanning tunnelling microscopy, and the direct observation of the Bose-Einstein condensate.
· The book will be supported by a web page containing an up-to-date bibliography, colour versions of some of the illustrations and links to other relevant sites.
· Previous editions have sold around 1200 copies per year. The book is used widely for QM courses.