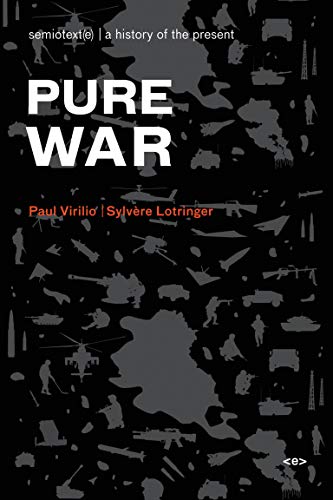 Book Description AUTONOMEDIA, United States, 2008. Paperback. Condition: New. Updated ed. Language: English. Brand new Book. Virilio and Lotringer revisit their prescient book on the invisible war waged by technology against humanity since World War II.In June 2007, Paul Virilio and Sylvere Lotringer met in La Rochelle, France to reconsider the premises they developed twenty-five years before in their frighteningly prescient classic, Pure War. Pure War described the invisible war waged by technology against humanity, and the lack of any real distinction since World War II between war and peace. Speaking with Lotringer in 1982, Virilio noted the "accidents" that inevitably arise with every technological development: from car crashes to nuclear spillage, to the extermination of space and the derealization of time wrought by instant communication. In this new and updated edition, Virilio and Lotringer consider how the omnipresent threat of the "accident"-both military and economic-has escalated. With the fall of the Soviet bloc, the balance of power between East and West based on nuclear deterrence has given way to a more diffuse multi-polar nuclear threat. Moreover, as the speed of communication has increased exponentially, "local" accidents-like the collapse of the Asian markets in the late 1980s-escalate, with the speed of contagion, into global events instantaneously. "Globalization," Virilio argues, is the planet's ultimate accident.Paul Virilio was born in Paris in 1932 to an immigrant Italian family. Trained as an urban planner, he became the director of the Ecole Speciale d'Architecture in the wake of the 1968 rebellion. He has published twenty-five books, including Pure War (1988) (his first in English) and The Accident of Art (2005), both with Sylvere Lotringer and published by Semiotext(e). Sylvere Lotringer, general editor of Semiotext(e), lives in New York and Baja California. He is the author of Overexposed: Perverting Perversions (Semiotext(e), 2007) and other books. Seller Inventory # BZV9781584350590

Book Description Paperback. Condition: New. New edition. Paperback. participation of people: it has grown into a pure and autonomous system. with a new introduction by Sylvere Lotringer and Paul Virilio In June 2007, Paul Virilio and Sylvere Lotringer met .Shipping may be from multiple locations in the US or from the UK, depending on stock availability. 253 pages. 0.367. Seller Inventory # 9781584350590