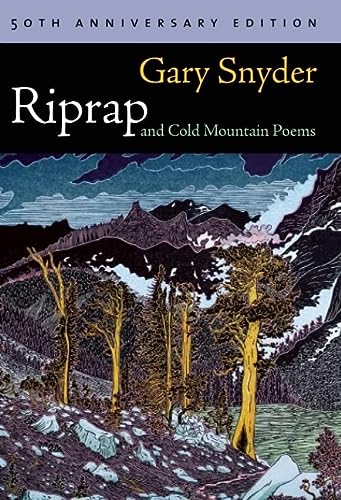 Gary Snyder is considered one of the greatest American poets of the 20th century and a key figure of the Beat generation. Stylistically situated somewhere between Tu Fu and Thoreau, his innovative poetry has been influential across the world. This 50th anniversary edition reprints and celebrates Gary Snyder's first ever book of poems, Riprap - published in Japan in 1959 by Origin Press. It also includes Snyder's translations of Han Shan's Cold Mountain Poems, arguably one of the finest translations of that remarkable poet ever made into the English language.

"His greatest strength--a quiet and profound elegance, an ability to write a simple phrase that seems to have been echoing through human consciousness for three or four thousand years."

Book Description Paperback. Condition: New. 50th. Paperback. By any measure, Gary Snyder is one of the greatest poets in America in the last century. From his first book of poems to his latest collection of essays, his work and his example, standing.Shipping may be from multiple locations in the US or from the UK, depending on stock availability. 67 pages. 0.181. Seller Inventory # 9781582436364