Items related to Why Decisions Fail: Avoiding the Blunders and Traps...

Paul C. Nutt Why Decisions Fail: Avoiding the Blunders and Traps That Lead to Debacles

Why Decisions Fail: Avoiding the Blunders and Traps That Lead to Debacles 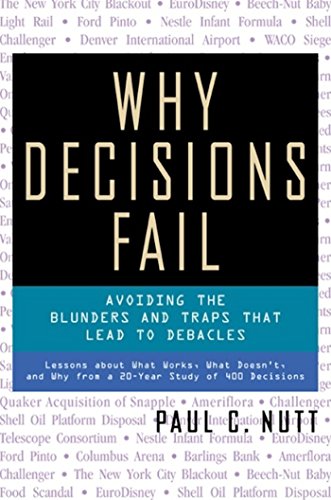 Why Decisions Fail critiques 15 infamously bad decisions that became public debacles. The author examines how these mistakes could have been avoided and explains how any organization's decision-making process can be improved to prevent such failures. Author Paul Nutt began by looking at 400 decisions made by top managers involving such topics as products and services, pricing and markets, personnel policy, technology acquisition, and strategic reorganization. Analyzing how each decision was made, he determined that two out of three decisions were based on failureprone or questionable tactics. He identifies these key errors and suggests alternatives that have proven successful.

Paul C. Nutt is a professor of Management Sciences and Public Policy and Management in the Fisher College of Business at The Ohio State University. He received his Ph.D. (1974) from the Univer-
sity of Wisconsin Madison and a B.S. and M.S. from the University of Michigan (1962, 1963), all in Industrial Engineering. He has written more than one hundred articles and six books. His current research interests include organizational decision making and radical change.
The decision-making stream of work, drawn upon to write this book, is taken from more than two decades of research into the decision-making practices used by people in organizations and how to improve them. Articles first appeared in 1984 and have continued at a steady pace since then, with several currently in press. In all, thirty-eight articles have appeared or will appear in referred journals and more are planned. This work has received numerous awards including two best theoretical/empirical paper awards from the Decision Sciences Institute, its top award, and several from the Academy of Management. His other work in decision making involves decision analysis, risk measurement, using MBTI and the Ennea- gram to identify a person s decision style, Multiattribute Utilities, ethics, and learning.

Drawing on more than two decades of research into 400 strategic decisions, Paul Nutt shows the startling scale of decision failure, examines the reasons why decisions fail and turn into public debacles, and shows how to improve the chance of being successful when making a decision. Fifteen infamous decision debacles are presented in detail and used to illustrate the causes of failure and remedies. Nutt translates his decades of award-winning research into practical terms that managers can use to improve their own decision-making practices. Paul Nutt tells fascinating, never before published stories of infamous public debacles and shows why those decisions failed. And he tells managers in practical terms how to avoid the same blunders and traps.