Items related to I Am My Own Woman: The Outlaw Life of Chartlotte Von...

Von Mahldorf, Charlotte I Am My Own Woman: The Outlaw Life of Chartlotte Von Mahlsdorf, Berlin's Most

I Am My Own Woman: The Outlaw Life of Chartlotte Von Mahlsdorf, Berlin's Most 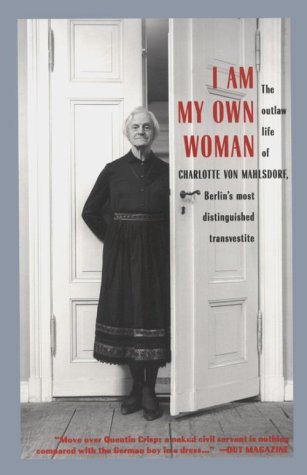 A soft-spoken transvestite wanting nothing more than to live as a hausfrau, Charlotte von Mahlsdorf instead was caught up in the most harrowing dramas of 20th century Europe, surviving both the Nazis and the Communists. I Am My Own Wife is her exquisitely written autobiography where she reveals her lifelong pursuit of sexual liberty. The memoirs of a transvestite Berliner, the story of the wonderful Grunderzeit museum, a look at German culture from the point of view of a permanent outsider, Charlotte s tale, like her life, is a surprising and provocative weave of sex, politics, and history. With the success of a new play about Charlotte, hailed by The New York Times as the "most stirring new work to appear on Broadway this fall," her story is reaching an entirely new readership of enthusiastic theater fans. Von Mahlsdorf was also the subject of a documentary, I Am My Own Woman (1993), directed by Rosa von Praunheim."

The outlaw life of Berlin's most distinguished transvestite
Hailed by DER SPIEGEL as speaking to "the fate of a whole generation of German homosexuals," I AM MY OWN WOMAN is the exquisitely written autobiography of Charlotte von Mahlsdorf, whose lifelong pursuits of sexual liberty and antique furniture offer a unique perspective on European history. During World War II, von Mahlsdorf murdered his father, dubbed himself Charlotte (after his cross-dressing lesbian aunt's lover) and has lived openly as a transvestite since. Dressed in high-heeled sandals and a good suit, Charlotte has collected furnishings from the Grunderzeit for half a century: in the Third Reich, she "rescued" pieces from Jewish deportees; in the German Democratic Republic, she protected "bourgeois cultural assets" from the Stasi. Now well past sixty, a quietly passionate, steadfast and serene figure, Charlotte shuns makeup and wears the simplest frocks. The Grunderzeit Museum--which Charlotte and her friends have defended against assault from skinheads--has become a symbol for the German lesbian and gay community. łMove over Quentin Crisp: A naked civil servant is nothing compared with the German boy in a dressŠ˛ ‹ Out. łAs a child, Lothar Berfelde loved to wear an apron and polish porcelain. Given his druthers, he would have chosen to live quietly in the 19th century, perhaps as a housekeeper in a well-appointed home near Berlin. Instead, his life took a bumpier courseŠ.˛ ‹ Time. "Like the late-1800s Grunderzeit bric-a-brac she privately collects and passionately dusts in her museum, Charlotte's been smacked and pawed for decades by a gallery of rogues and brutes. . .and she's resisted. In drag. . .It is not the transgendered soul that is perverse, but the situation in which it lives. . ." --The Village Voice.

I AM MY OWN WOMAN: THE OUTLAW LI