Items related to Forest for the Trees

Lerner, Betsy Forest for the Trees

Forest for the Trees 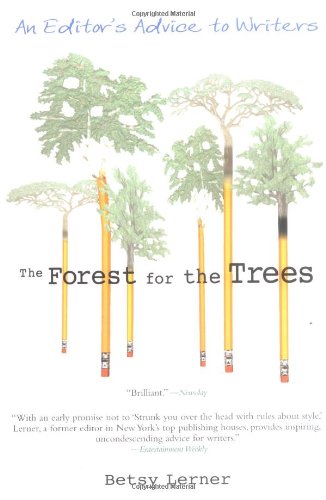 A prize-winning poet, author's agent, and editor offers writers the wisdom and insights she has gained from her experiences, providing inspiration, inside views, and a colorful, anecdotal look at the world of publishing. Reissue.

One feels for Betsy Lerner's writers. Oh, sure, Lerner must be a fabulous agent. But too bad for them that in gaining her as an agent, they lost her as an editor. How rare and wonderful it must have been to have such an advocate, adviser and, yes, admirer so firmly ensconced in publisher territory (at various times, Houghton Mifflin, Ballantine, Simon & Schuster and Doubleday). In The Forest for the Trees, Lerner reflects on writing and publishing, both from an editor's point of view. There are so many books by writers and agents promising to disclose what editors really want; here, finally, is one straight from the source. Like all experienced editors, Lerner has seen writers at their best, and she has seen them at their worst. "Like shrinks", she says, editors "have a privileged and exclusive view into a writer's psyche, from the ecstasy of acquisition to the agony of the remainder table".

To writers, particularly unpublished ones, editors can seem imposing figures determined to thwart their success. They won't take calls, they don't offer feedback--sometimes they don't respond to queries at all. Guess what: editors don't lug home hundreds of pounds of manuscripts to read each year because they aren't looking for good writing. "An editor gets off", says Lerner, "on the thrill of discovering a new writer". Editors crave "succinct, well-written cover letters", inspiration that comes from within (as opposed to from the best-seller list), and "catchy, clearly targeted title[s]". They detest unsolicited phone calls, "query letters that sound as if they were penned by Crazy Eddie", and writers who offer to "write it however I want it" (it's "like saying I'll be straight or gay; you tell me, I have no preference"). Lerner is aware of how excruciating it is for a writer to wait for feedback on his work. But she also lets writers in on a little secret of her own. "I'm always anxious about the author's response", she confides. "Will he or she take to my editing?" --Jane Steinberg

"With an early promise not to 'Strunk you over the head with rules about style, ' Lerner... provides inspiring, uncondescending advice for writers." -Entertainment Weekly

"[Lerner] doesn't preach on how to write a book but rather tries to help writers and would-be authors cope with such problems as 'being alone with it.' It's a survival course. She wants to help the writer who cannot get started embark, the writer stalled between projects ignite. She wants you to be an effective 'self-promoter' and not a 'self-saboteur.' The book is also an affirmation that late bloomers can become successful writers." -The New York Times" "[Lerner] has a wicked sense of humor. But don't think that means her book isn't brilliant. It is. Cleverly disguised as a sensible reference work, [this] is in fact a riveting safari through the wilds of the writer's brain, as well as an honest and unpatronizing guide to publishing from every angle. Its tone is singularly authoritative, compassionate, irreverent, and unafraid. Unquestionably a gift to writers of every persuasion." -Newsday "Economical and witty. The Forest for the Trees should become a permanent part of any writer's or editor's personal library." -The Seattle Times "Solid, insider advice on every step of the publishing process... With this book, Betsy Lerner becomes what every writer hopes for--a friend in the business." -Chicago Tribune

1. The Forest for the Trees: An Editor's Advice to Writers

2. The Forest for the Trees: An Editor's Advice to Writers

3. The Forest for the Trees: An Editor's Advice to Writers

4. The Forest for the Trees: An Editor's Advice to Writers

5. The Forest for the Trees: An Editor's Advice to Writers Lerner, Betsy