Items related to A Chakra and Kundalini Workbook: Psycho-Spiritual Techniques... 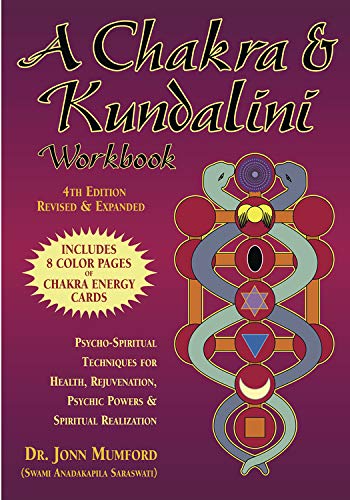 Spend just a few minutes each day practicing the remarkable yoga and energy work techniques in this book and you will quickly build a solid foundation of inner relaxation and energy discipline that leads to better health, a longer life, and greater control over your personal destiny. Dr. Jonn Mumford's classic guide to the fundamentals of energy work is one of the clearest, most accessible books on yoga available. It offers a wealth of illustrations, tables, and full-color chakra energy cards to bridge the gap between instruction and understanding. In this unique self help book's final section, a beautiful Tantric ritual describes the "levers" with which you can transform an everyday moment into one of transcendence. A Chakra & Kundalini Workbook includes a twelve-week plan of powerful psychic techniques, breath and posture exercises for ultimate health and wellness. Experience total release from everyday stress and worries Overcome insomnia, mild depression, anxiety, and panic attacks Rejuvenate your nervous system and sharpen sensory perception Improve your memory and access "forgotten" subconscious material Develop your psychic abilities, including telepathy and clairvoyance Enter states of ecstasy and gain cosmic consciousness

Very original material compiled from a lifetime of teaching
I have been classically trained in India and as a physician (D.O.) I have been able to conjoin a western medical approach with Indian traditional philosophy and practice. The text contains many afterimage visualization techniques and unique meditation methods never before released. e.g. Try Chapter 13 to learn the fastest route to an altered state of consciousness using a 1 cent coin. Interested in OOBS?(Out-Of-Body Sensations) Try 'Geoff's Magic Trance Spiral' on page 34. Practice Yoni Mudra Chapter three and give yourself a total acupressure technique while you do it! If you wish original information about 'Sacred Sexuality' go to chapter fourteen and learn never before revealed Tantra exercises. I know what this book can do because I have spent a lifetime practicing, developing and integrating the best of East and West. -----------------------------------------------------------

Dr. Jonn Mumford (Swami Anandakapila Saraswati) wrote his first book "Psychosomatic Yoga" in 1961 while completing an intensive period of study in India. His current books include "Ecstasy Through Tantra, "A Chakra and Kundalini Workbook," "Mind Magic Kit" and "Magic Tattwas" from Llewellyn. Dr. Mumford is a direct disciple of Dr. Swami Gitananda and Paramhansa Swami Satyananda Saraswati, Bihar. He was initiated by Swami Satyananda in 1973, at BSY Monghyr, Bihar State, India. Dr. Mumford is respected across the world for his knowledge and scholarship. A born teacher, Dr. Mumford frequently gives lecture on relaxation techniques, sexuality, Tantra and other aspects of human development and spirituality . No mere theoretician, Dr. Mumford is a world renowned authority on Tantra and yoga. He has demonstrated his own self-mastery of cardiac cessation, obliteration of individual pulse beat at will, sensory withdrawal and voluntary breath retention over the 5 minute range, and start and stop bleeding on command. His background combining chiropractic and psychology with extensive international experience in a wide range of Eastern disciplines makes Dr. Mumford eminently well-suited to the task of disseminating the secrets of Tantra unto the West.