Items related to Vampires - The Occult Truth (Llewellyn truth about... 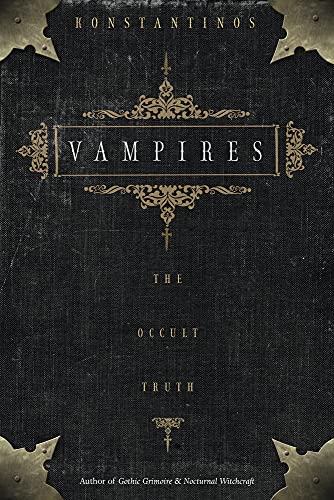 The facts are stranger than anything you may have read, heard, or imagined before now! Vampires. They really exist, and this book rips away the myth to expose their habits and lifestyles. "Vampires: the Occult Truth" divulges actual first-person encounters with vampires of all types - the ancient undead of folklore, contemporary mortal blood drinkers, and the most dangerous creatures of all: psychic vampires, who intentionally drain the life force from their victims.

When I first saw the title of Konstantinos' manuscript, Vampires, I was rather hesitant to even look at it. The scientific side of me was quite doubtful. After all, vampires are fiction, aren't they?

No. They're not. Konstantinos presents undeniable proof that vampires existed...and still exist today. He reveals the history of vampires throughout the world. Virtually every culture has records and myths of them. He then reveals historic vampires. Vampires discusses the four types of vampires that walk this earth. You'll learn how to identify them and discover what they do. Vampires also gives you explicit instructions on how to protect yourself from vampiric attacks. If you are a doubter, as I was, this book is a must. The facts become clear: vampires are a literal reality. You will read letters from real vampires who tell what their lives are actually like. This is more exciting than any fictional interview with a vampire because it is real! Whether you believe in vampires or are a doubter, Vampires is a must!
About the Author:

Konstantinos is a recognized expert on occult, new age, and paranormal topics. He has a bachelor's degree in journalism and technical writing from New York Polytechnic Institute. He is a published author of articles and short fiction which have been featured in numerous publications including Popular Electronics, The Spook, and FATE Magazine. Konstantinos is a popular lecturer on the paranormal at colleges and bookstores in the New York City area and he has appeared on CNBC's After Hours and The Ricki Lake Show. A Dark Neopagan, Konstantinos has been researching the occult and practicing magick for over fifteen years. Born and raised in Long Island, New York, Konstantinos now devotes his time to writing, singing Gothic rock music, and exploring nocturnal life in New York City and around the country. Konstantinos is also the author of Vampires: The Occult Truth, Summoning Spirits: The Art of Magical Evocation, Speak with the Dead: 7 Methods for Spirit Communication, Gothic Grimoire, Nocturnal Witchcraft, Nocturnicon: Calling Dark Forces and Powers, and the forthcoming Werewolves: The Occult Truth (September 2010).

Book Description Llewellyn Publications,U.S., United States, 2002. Paperback. Condition: New. Language: English. Brand new Book. Discover the strange world of the undead and the proof that creatures of the night exist. The facts about vampires are stranger than anything you may have read, heard, or imagined before. Vampires rips away the myth and exposes the habits and lifestyles of these beings. The author reveals the occult truths about these creatures, including actual first-person encounters with vampires of all types--the ancient undead of folklore, contemporary mortal blood drinkers, and the most dangerous creatures of all: psychic vampires who intentionally drain the life force from their victims. Learn about the four types of vampiresRead about vampire legends from around the worldDiscover vampires from history, including: Arnold Paole of SerbiaPeter Plogojowitz and the Count de Cabreras of HungaryThe vampire of Croglin Grange, Cumberland, EnglandCountess Elizabeth Bathory, responsible for up to 650 deathsGilles de RaisFritz Haarman, of Germany, from ninety years agoJohn Haigh of Yorkshire, England, from just before WWIIAnd, of course, the real Vlad Dracula Present-day blood drinkersHow to protect yourself from vampires Included are letters from contemporary vampires; you will be shocked and surprised as you discover what these people are really like. Besides learning about the psychic vampire that unintentionally drains you of your energy as well as the intentional psychic vampire, you'll learn rituals for protection and methods to avoid falling into their clutches. Seller Inventory # AAC9781567183801

Book Description Paperback. Condition: New. Paperback. Discover the strange world of the undead and the proof that creatures of the night exist. The facts about vampires are stranger than anything you may have read, heard, or imagined before. .Shipping may be from multiple locations in the US or from the UK, depending on stock availability. 208 pages. 0.254. Seller Inventory # 9781567183801