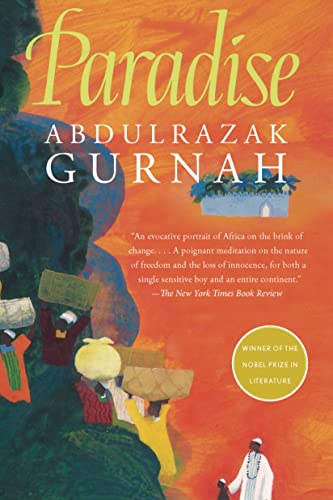 Paradise is at once the story of an African boy's coming of age, a tragic love story, and a tale of the corruption of traditional African patterns by European colonialism. It presents a major African voice to American readers - a voice that prompted Peter Tinniswood to write in the London Times, reviewing Gurnah's previous novel, "Mr. Gurnah is a very fine writer. I am certain he will become a great one." Paradise is Abdulrazak Gurnah's great novel. At twelve, Yusuf, the protagonist of this twentieth-century odyssey, is sold by his father in repayment of a debt. From the simple life of rural Africa, Yusuf is thrown into the complexities of precolonial urban East Africa - a fascinating world in which Muslim black Africans, Christian missionaries, and Indians from the subcontinent coexist in a fragile, subtle social hierarchy. Through the eyes of Yusuf, Gurnah depicts communities at war, trading safaris gone awry, and the universal trials of adolescence. Then, just as Yusuf begins to comprehend the choices required of him, he and everyone around him must adjust to the new reality of European colonialism. The result is a page-turning saga that covers the same territory as the novels of Isak Dinesen and William Boyd, but does so from a perspective never before available on that seldom-chronicled part of the world.

‘Gurnah evokes his world in poetic prose which is pure and lucid — a small paradise in itself.’ -- Guardian

‘Paradise is alive with the unexpected. In it, an obliterated world is enthrallingly retrieved.’ -- Sunday Times

‘The pleasures, sadnesses and losses in all the shining facets of this book are lingering and exquisite.’ -- Guardian

Sold by his father in repayment of a debt, 12-year-old Yusuf is thrown from his simple rural life into the complexities of precolonial urban East Africa. Through Yusuf's eyes, Gurnah depicts communities at war, trading safaris gone awry, and the universal trials of adolescence.

Book Description Paperback. Condition: New. Language: English. Brand new Book. From the Nobel Prize winner, a coming-of-age story that illuminates the harshness and beauty of an Africa on the brink of colonization "[Gurnah's novels] recoil from stereotypical descriptions and open our gaze to a culturally diversified East Africa unfamiliar to many in other parts of the world." --Nobel Committee for Literature at the Swedish Academy Shortlisted for the Booker Prize and the Whitbread Award, Paradise was characterized by the Nobel Prize committee as Abdulrazak Gurnah's "breakthrough" work. It is at once the chronicle of an African boy's coming-of-age, a tragic love story, and a tale of the corruption of African tradition by European colonialism.Sold by his father in repayment of a debt, twelve-year-old Yusuf is thrown from his simple rural life into complexities of pre-colonial urban East Africa. Through Yusuf's eyes, Gurnah depicts communities at war, trading safaris gone awry, and the universal trials of adolescence. The result is what Publishers Weekly calls a "vibrant" and "powerful" work that "evokes the Edenic natural beauty of a continent on the verge of full-scale imperialist takeover.". Seller Inventory # APC9781565841635