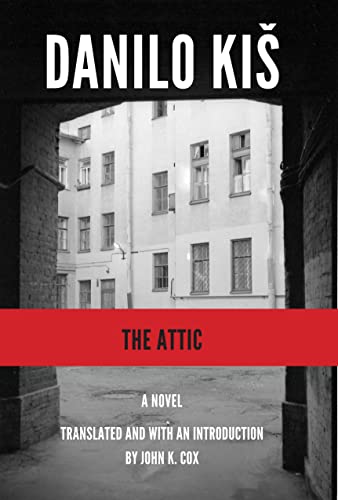 The Attic is Danilo Kis' first novel. Written in 1960, published in 1962, and set in contemporary Belgrade, it explores the relationship of a young man, known only as Orpheus, to the art of writing; it also tracks his relationship with a colorful cast of characters with nicknames such as Eurydice, Mary Magdalene, Tam-Tam, and Billy Wise Ass. Rich with references to music, painting, philosophy, and gastronomy, this bohemian Bildungsroman is a laboratory of technique and style for the young Kis at once a depiction of life in literary Belgrade, a register of stylistic devices and themes that would recur throughout Kis' oeuvre, and an account of one young man s quest to find a way to balance his life, his loves, and his art.

Danilo Kis was a Yugoslavian novelist, short story writer and poet who wrote in Serbo-Croatian. Kis was influenced by Bruno Schulz, Vladimir Nabokov, Jorge Luis Borges and Ivo Andri , among other authors. His most famous works include A Tomb for Boris Davidovich and The Encyclopedia of the Dead.

2. The Attic (Paperback or Softback)

Book Description Paperback. Condition: New. Paperback. The Attic is Danilo KiS's first novel. Written in 1960, published in 1962, and set in contemporary Belgrade, it explores the relationship of a young man, known only as Orpheus, to the art .Shipping may be from multiple locations in the US or from the UK, depending on stock availability. 112 pages. 0.454. Seller Inventory # 9781564787347