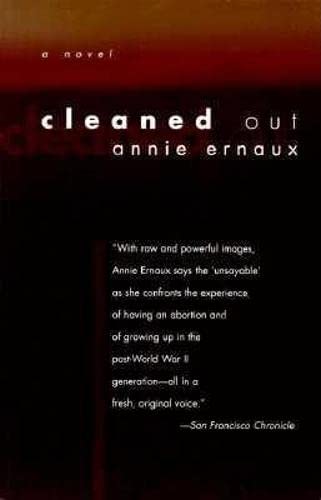 Cleaned Out tells the story of Denise Lesur, a 20-year-old woman suffering the after-effects of a back-alley abortion. Alone in her college dorm room, Denise attempts to understand how her suffocating middle-class upbringing has brought her to such an awful present. Ernaux, one of France's most important contemporary writers, daringly breaks with formal French literary tradition in this moving novel about abortion, growing up, and coming to terms with one's childhood.

Written with raw and powerful images, Annie Ernaux says the 'unsayable' as she confronts the experience of having an abortion and of growing up in the post-World War II generation?all in a fresh, original voice. -- San Francisco Chronicle Cleaned Out is more than a powerful evocation of the class system in France in the 1950s and of one woman's struggle to move up in the class hierarchy and forget her past. It is also a novel that serves as a haunting contribution, both in subject matter and literary form, to the project of the culturally disenfranchised speaking in their own voice. -- Bloomsbury Review

She won the Prix Renaudot in 1984 for her book La Place, an autobiographical narrative focusing on her relationship with her father and her experiences growing up in a small town in France, and her subsequent process of moving into adulthood and away from her parents' place of origin.