Items related to Being There: Necessity of Fieldwork (Smithsonian series...

Bradburd, D.J. Being There: Necessity of Fieldwork (Smithsonian series in ethnographic inquiry)

Being There: Necessity of Fieldwork (Smithsonian series in ethnographic inquiry) 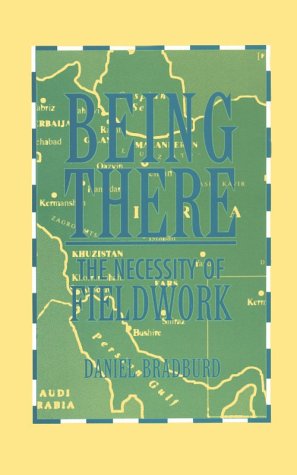 Drawing on the extraordinary and everyday events of his two years among the Komachi nomads of the southern Iran, Daniel Bradburd shows how direct interaction with another culture can provide the intense, forceful encounters essential to anthropological understanding. In Being There, lively accounts of his fieldwork illuminate not only the complexities of Komachi life but also toward comprehending a culture.
Bradburd also explores the differences between anthropological and other kinds of experience by comparing his interpretations of Iranian culture with those of four nineteenth- and early-twentieth-century travelers in the region. The accounts of a young adventurer, a seasoned travel writer, a pre-World War I intelligence officer, and the wife of Britain's ambassador include observations that, when stripped of their Victorian trappings, often parallel Bradburd's own.
Defining ethnography as the constant attempt to put specific events and encounters into a fuller context, Bradburd counters that field work virtually forces understanding on those who practice it. Exploring the role of the anthropologist as an interpreter of culture, he contends that the knowledge achieved through field experience holds the potential for bridging the world's increasing - and increasingly destructive - cultural divisions.

Daniel Bradburd is a professor of anthropology at Clarkson University.

1. BEING THERE The Necessity of Fieldwork

2. BEING THERE The Necessity of Fieldwork Daniel Bradburd