Items related to The Great Society and the High Tide of Liberalism (Political... 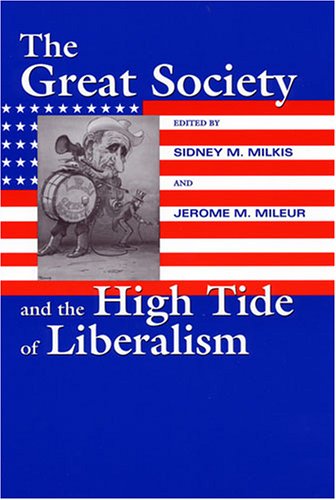 The long era of liberal reform that began with the Progressive movement of the early twentieth century and continued with the New Deal, culminated in the 1960s with Lyndon Johnson's Great Society. Inspired by the example of his mentor, Franklin Roosevelt, Johnson sought to extend the agenda of the New Deal beyond the realm of economic security to civil rights, housing, education, and health care. In the end, however, his bold ambitions for a Great Society, initiated against the backdrop of an increasingly costly and divisive war, fueled a conservative backlash and undermined faith in liberalism itself. In this volume of original essays, a distinguished group of scholars and activists reassess the mixed legacy of this third major reform period of the last century. They examine not only the policies and programs that were part of LBJ's Great Society, but also the underlying ideological and political shifts that changed the nature of liberalism. Some of the essays focus on Lyndon Johnson himself and the institution of the modern presidency, others on specific reform measures, and still others on the impact of these initiatives in the decades that followed. Perspectives, methodologies, and conclusions differ, yet all of the contributors agree that the Great Society represented an important chapter in the story of the American republic and its ongoing struggle to reconcile the power of the state with the rights of individuals-a struggle that has continued into the twenty-first century.

"You can't understand American politics today without understanding the 1960s, and you can't really understand the 60's without reading this collection of first-rate essays by some of the nation's most thoughtful observers of modern America." - Steve Gillon, author of Boomer Nation: The Largest and Richest Generation Ever and How It Changed America"

Sidney M. Milkis is White Burkett Miller Professor and chair of the Department of Politics at the University of Virginia and author of The President and the Parties. For many years the editor of Polity, Jerome M. Mileur is professor of political science at the University of Massachusetts Amherst.

1. The Great Society and the High Tide of Liberalism

Book Description University of Massachusetts Press. Hardcover. Condition: Very Good. A copy that has been read, but remains in excellent condition. Pages are intact and are not marred by notes or highlighting, but may contain a neat previous owner name. The spine remains undamaged. An ex-library book and may have standard library stamps and/or stickers. At ThriftBooks, our motto is: Read More, Spend Less. Seller Inventory # G1558494944I4N10

2. The Great Society and the High Tide of Liberalism (Political Development of the American Nation)