Items related to A Concise History of World Population

A Concise History of World Population 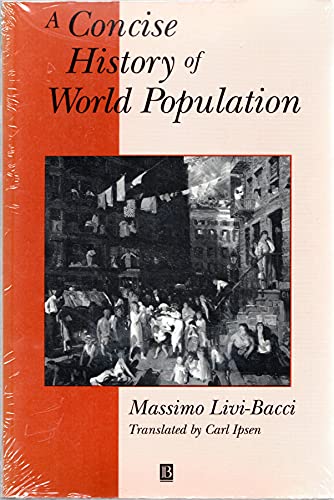 This is a concise account of the history of the human population of the world including the history of migrations, the effects of plagues, wars, fertility transitions, mortality, fecundity, marriage and family patterns. The author also describes present day trends (in which by and large the populations of rich countries are stable, those of poor countries grow exponentially) and considers the problems the world will face by the year 2010. Massimo Livi Bacci's book will have much more than academic interest. It is informative and accessible, and calmly explains issues often treated in an emotional gloom-and-doom fashion. The author steers a balanced course through the optimist and catastrophe camps, suggesting an alternative way to view the evident problems of overcrowding, degradation and disease - one that is nothing less than a modern recasting of Malthusian theory.

Reviews of the first edition:

"A fine book, well worth reading and highly stimulating for students. It can be thoroughly recommended." Population Studies

"Livi–Bacci marshals an impressive array of evidence to describe large–scale population changes in human history and their future implications." Choice

"This is a bold and intelligent book providing a coherent overview of an enormous topic. Livi–Bacci is a thoughtful, incisive, and wide–ranging guide into a vast terrain; readers will not get lost." Journal of Interdisciplinary History

"This is a balanced and thoughtful treatment of an important and highly controversial subject. It is breathtaking in scope, and sure to become a classic." Richard A. Easterlin, University of South Carolina

"Graceful and wide–ranging, the story is fascinating, and told with style and enthusiasm." Sam Preston, University of Pennsylvania

This book describes and explains the history of human population. It examines the changing patterns of its growth, and the effects upon it of migrations, wars, disease, technology and culture. Since its publication in 1992 it has become the most widely read account of the subject, valued for its contemporary recasting of theory, for its informative and accessible style, and for its reasoned treatment of issues crucial to the future of every species.

The book is now published in a fully revised edition, taking account of recent trends and research. The author provides a new account of the causes and consequences of European migration and colonization, and of the interactive influence of nature, place and space on settlement and population dynamics. He has revised his discussion of the relationship between development, affluence and population change.

The final chapters of the book have been entirely recast to give an extensive analysis of the carrying capacity of the planet in relation to a possible doubling of population during the next fifty years. The author examines the effects of changes in relative affluence and population growth on food production, resources and the natural environment.

We are entering a new historical phase, Massimo Livi–Bacci suggests, in which population growth will cease to produce economies of scale and may start to produce overwhelming diseconomies – the result of which could be environmental collapse and human catastrophy. The underlying purpose of this book is to understand the links between nature, culture and population, and to seek thereby the means of avoiding such an outcome.

A Concise History of World Population

A CONCISE HISTORY OF WORLD POPUL