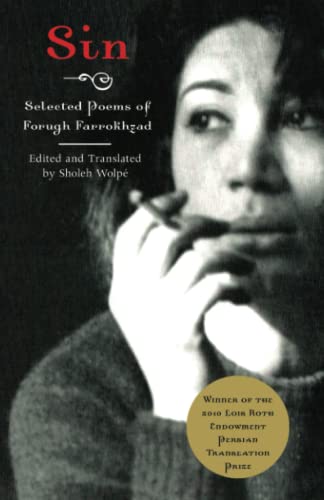 For the first time, the work of Iranian poet Forugh Farrokhzad is being brought to English-speaking readers through the perspective of a translator who is a poet in her own right, fluent in both Persian and English and intimately familiar with each culture. Sin includes the entirety of Farrokhzad's last book, numerous selections from her fourth and most enduring book, Reborn, and selections from her earlier work and creates a collection that is true to the meaning, the intention, and the music of the original poems. Farrokhzad was the most significant female Iranian poet of the twentieth century, as revolutionary as Russia's Akhmatova and Tsvetaeva and America's Plath and Sexton. She wrote with a sensuality and burgeoning political consciousness that pressed against the boundaries of what could be expressed by a woman in 1950s and 1960s Iran. She paid a high price for her art, shouldering the disapproval of society and her family, having her only child taken away, and spending time in mental institutions. Farrokhzad died in a car accident in 1967 at the age of thirty-two. Sin is a tribute to the work and life of this remarkable poet.

"The shock of Farrokhzad's poetry is the shock of purity, of ice water, of a corpse rotting in broad daylight. The purity is that of her relentless intensity. . . . [Wolpé's] translations are hypnotic in their beauty and force. This book will be treasured by readers who crave not a clash of cultures but a connection." -Alica Ostriker, From the Foreword "Translated with deep admiration by Sholeh Wolpé, a poet fluent in both Persian and English, these lucid translations capture the absolute ferocity and passion that have made Forugh Farrokhzad so beloved and so infamous." -American Poet "Poetic modernism came to Iran as late as the 1960s, when Farrokhzad (1935-1967) streaked across the literary horizon. . . . Of course, she became a scandal, one that endures to this day. . . . [T]he poems' long lines and musical repetitions sweep the reader away as effectively as any American projective verse." -Booklist "Potent . . . like certain works by Charles Wright or Seamus Heaney [these poems] are meticulously built to be precise and elusive at once. They reach outside of the poet's own experience, beyond her headspace, her gender, her country of origin. Both pensive and urgent, they strive for the universe." -Lebanon Daily Star "Farrokhzad is compared to Akhmatova and Plath. She's their peer, and this is a magnificent book of beautifully wrought, distinctly modern poems." -Robert Covelli, The New Mexican Magazine

Sholeh Wolpé is the author of The Scar Saloon and Rooftops of Tehran. Her poems, translations, essays, and reviews have appeared in many publications.

Alicia Ostriker is the author of eleven volumes of poetry, a two-time National Book Award finalist, and a winner of the William Carlos Williams Award of the Poetry Society of America.

Book Description University of Arkansas Press, United States, 2010. Paperback. Condition: New. Language: English. Brand new Book. Winner of the 2010 Lois Roth Persian Translation Prize Sin includes the entirety of FarrokhzadAEs last book, numerous selections from her fourth and most enduring book, Reborn , and selections from her earlier work, and creates a collection that is true to the meaning, the intention, and the music of the original poems. Seller Inventory # AAC9781557289483

Book Description Paperback. Condition: New. Paperback. Winner of the 2010 Lois Roth Persian Translation Prize Sin includes the entirety of FarrokhzadAEs last book, numerous selections from her fourth and most enduring book, Reborn , and select.Shipping may be from multiple locations in the US or from the UK, depending on stock availability. 134 pages. 0.245. Seller Inventory # 9781557289483