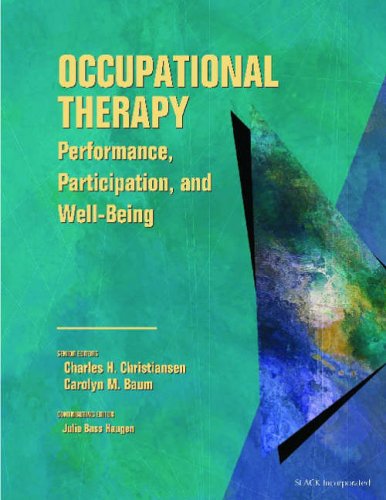 Highly valued by both therapists and educators, Occupational Therapy: Performance, Participation, and Well-Being has been integral to the evolution of occupational therapy services and functions. Charles H. Christiansen and Carolyn M. Baum have produced an impressive third edition incorporating new features and topics that shape the modern era in occupational therapy practice. Senior editors Charles H. Christiansen and Carolyn M. Baum, along with contributing editor Julie Bass-Haugen have worked collectively to go beyond the presentation of occupational therapy theories. The third edition utilizes a more learner-friendly approach by explaining how the theories apply in various practice settings. This format enables students, instructors, and practitioners to connect the crucial link between theory and practice. The first section is organized in a manner that first develops and then establishes a clear understanding of human occupation. Section Two makes explicit the Person-Environment-Occupation-Performance Model that can be used at an individual, organization, or population level. Section Three covers current and emerging trends, as well as introduces major intervention strategies that are used in the field, as well as comprehensive literature support for use in occupational therapy practice.

"The reader is guided towards discovering what is already known about health and well-being: it is an excellent introduction for those new to the profession as well as practitioners who want to rediscover some of their core skills and philosophies." -- Dr. Gill Chard, British Journal of Occupational Therapy