Items related to Breaking Ground: A Century of Craft Art in Western... 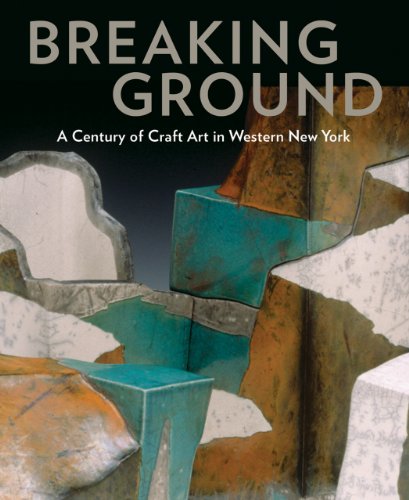 Breaking Ground: A Century of Craft Art in Western New York is the first book to fully explore the history of the craft movement within this region. Richly illustrated with vintage and contemporary photography, the publication surveys the work of early pioneers as well as current artists. The book features original interviews with four masters who work in the area- Wendell Castle (wood), Alberts Paley (metal), Michael Taylor (glass), and Wayne Higby (clay). It concludes with a selection of contemporary work by other notable artists that shows the diversity of activity in the region.

In the early 100s western New York became a hub of the Arts and Crafts movement with the founding of the Roycroft community in East Aurora; Gustav Stickley's furniture workshops in Syracuse; and Steuben Glass in Corning. It was also during this period that Charles Fergus Binns developed the New York School of Clay-Working and Ceramics at Alfred University, which quickly became the leader in its field. In 1950 the School for American Craftsmen (SAC) moved to the Rochester Institute of Technology, further establishing the area as a nexus of craft activity. Founded by Aileen Osborn Webb, a major patron of the craft movement, SAC became reknowned for its comprehensive programs and its outstanding faculty. The region still abounds with educational programs and professional artists who are breaking ground in the craft media, making the area a vital community for the arts.

Barabara Lovenheim, journalist and author, has written on the arts and lifestyle for The New York Times, The Wall Street Journal, The International Herald Tribune and many national magazines.

Paul J. Smith, Director Emeritus of the American Craft Museum (now Museum of Arts and Design) has been involved with the craft and design field for more than 50 years.

Book Description Hudson Hills Press Inc.,U.S., United States, 2010. Hardback. Condition: New. Language: English. Brand new Book. Artist interviews with Wendell Castle, Albert Paley, Wayne Higby, and Michael Taylor Definitive history of this rich artist's community in New York State that fostered some of the leading artists in the furniture and studio craft movement in America Of interest to all craft museums, schools, and libraries as well as collectors and art historians Includes the work of artists whose work has been collected by the Smithsonian's Renwick Gallery, Washington, D.C.; New York City's Museum of Arts and Design and Metropolitan Museum of Art; the Philadelphia Museum of Art, and the Victoria and Albert Museum, among many others. It was in the rolling hills and small cities of western New York State that the studio craft movement took root and thrived. In the early 1900s it pulsated with Charles Fergus Binns's New York State School of Clay-Working at Alfred University; Elbert Hubbard's Roycroft community; Gustav Stickley's furniture workshops, and Steuben Glass in Corning.In the middle-to-late 20th century, Alfred nourished such important ceramists as Daniel Rhodes, Ted Randall, and Robert Turner; the school is still ripe with talented artists including Val Cushing, Anne Currier, Andrea and John Gill, and Walter McConnell. In 1950, the School for American Craftsmen (SAC) moved to Rochester recruiting from Europe Tage Frid, John Prip, and Franz Wildenhain to build its departments. Today the area is a nexus of craft activity with such artists as Tom Markusen, Andy Buck, John Eric Byers, and Concetta Mason. Seller Inventory # POW9781555953546