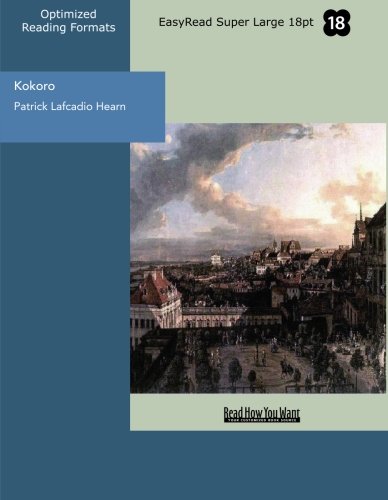 Books for All Kinds of Readers. ReadHowYouWant offers the widest selection of on-demand, accessible format editions on the market today. Our 7 different sizes of EasyRead are optimized by increasing the font size and spacing between the words and the letters. We partner with leading publishers around the globe. Our goal is to have accessible editions simultaneously released with publishers' new books so that all readers can have access to the books they want to read. To find more books in your format visit ww.readhowyouwant.com

"One of the honorable ancestors of a brilliant generation of novels." --Donald Barr, New York Times

Natsume Soseki (1867–1916) is one of the great writers of the modern world. Educated at Tokyo Imperial University, he was sent to England in 1900 as a government scholar. As one of the first Japanese writers to be influenced by Western culture, his various works are widely read in Japan, and contemporary authors in Japan continue to be influenced by his oeuvre, which also includes The Gate, I Am a Cat, Sanshiro, and The Three Cornered World.

Edwin McClellan is Professor of Japanese Literature at Yale University. His translation of Kokoro, presented here, has been selected for the UNESCO Collection of Representative Works.