Items related to Breakout from Juno: First Canadian Army and the Normandy... 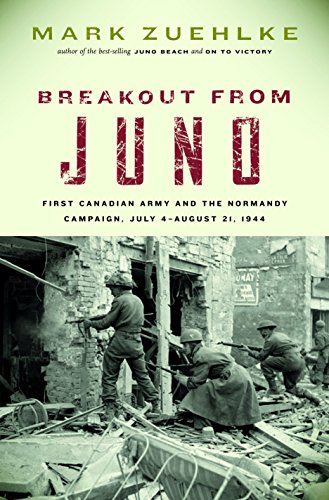 Breakout from Juno The ninth book in the Canadian Battle Series, "Breakout from Juno," is the first dramatic chronicling of Canada's pivotal role throughout the entire Normandy Campaign following the D-Day landings. On July 4, 1944, the 3rd Canadian Infantry Division won the village of Carpiquet but not the adjacent airfield. Instead of a speedy victory, the men faced a bloody fight. The Canadians advanced relentles... Full description

Mark Zuehlke is Canada's leading popular historian. "Operation Husky" is the latest in Mark's bestselling series on Canada's major army campaigns and battles of World War II, which include "Ortona, The Liri Valley, The Gothic Line, Juno Beach, Holding Juno, " and "Terrible Victory." He is also the author of the critically acclaimed "For Honour's Sake: The War of 1812 and the Brokering of an Uneasy Peace; The Gallant Cause: Canadians in the Spanish Civil War, 1936-1939;" and co-author of "The Canadian Military Atlas: Four Centuries of Conflict from New France to Kosovo." "Operation Husky" is his 20th published book. When not writing history, he often turns to fiction and is the author of the award-winning Elias McCann mystery series. He lives in Victoria, British Columbia.