The Taming of Tango Harris (A Tommy Fox Thriller) 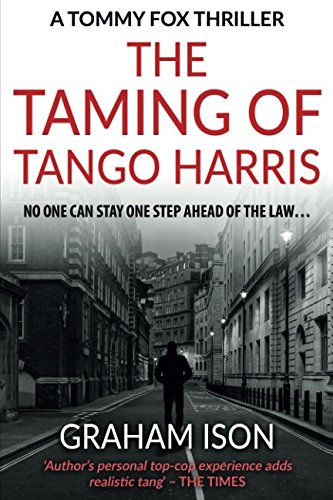 Another case for Detective Tommy Fox ... The body of a high-end prostitute is found in a hotel in the West End with a black stocking around her neck. Hours later, on the other side of London, a lorry is hijacked — and the driver abducted and abandoned on a golf course, while another man is shot dead, his corpse dumped in the boot of a stolen car. For Detective Chief Superintendent Tommy Fox of the Flying Squad, this series of crimes is no coincidence. The lorry heists bear all the hallmarks of gang leader Thomas Walter Harris — better known as Tango Harris. It is also discovered that the dead man worked for Harris’ rival, Billie Crombie. But despite his suspicions, Fox has no proof that the two murders are connected. In order to solve the case, he must first prove that all three incidents are linked — and that Harris is involved. But with Harris seemingly always one step ahead of him, this is one case that will not be easy to solve... Can Detective Fox bring about the taming of Tango Harris?

Tomfoolery... ‘Another tangy procedural from ex-DCS Ison, fully stretching the unconventional wits of his dapper Cockney head of the Flying Squad ... The villains ring as true as the coppers throughout.’ - John Coleman, Sunday Times ‘Well-calibrated crime, with textbook plotting and execution. Comeuppance equally well orchestrated. Unmistakably authentic, with Ison’s background knowledge adding sting and substance to proceedings.’ - Literary Review The Laundry Man... ‘A fast-paced pro’s job with a surprise murderer cleverly held in the wings until near curtain-fall.’ - John Coleman, Sunday Times The Home Secretary Will See You Now... ‘Altogether a police procedural to put beside McBain. In other words, top of the class.’ - Julian Symons, Independent Graham Ison was born and brought up in Surrey. The son of an artist and the grandson of a composer, he served in the army for five years before joining the police. He spent most of his service with the CID at Scotland Yard and between 1967 and 1971 was Personal Protection Officer to Prime Ministers Harold Wilson and Edward Heath. After a spell of duty with the Diplomatic Protection Group, he returned to Scotland Yard in 1981 as a detective chief superintendent. He retired at this rank in 1986 and now lives in Hampshire.

1. The Taming of Tango Harris (A Tommy Fox Thriller)