Items related to In vain. Translated from the Polish by Jeremiah Curtin.... 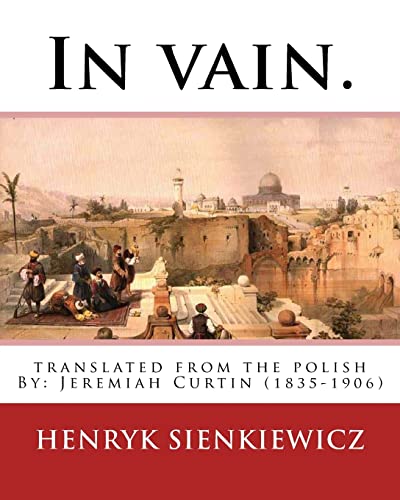 Book Description Paperback. Condition: New. Language: English. Brand new Book. Henryk Adam Aleksander Pius Sienkiewicz ( also known by the pseudonym "Litwos" 5 May 1846 - 15 November 1916) was a Polish journalist, novelist and the Nobel Prize laureate. He is best remembered for his historical novels, especially for his internationally known best-seller Quo Vadis (1896). Born into an impoverished Polish noble family in Russian-ruled Congress Poland, in the late 1860s he began publishing journalistic and literary pieces. In the late 1870s he traveled to the United States, sending back travel essays that won him popularity with Polish readers. In the 1880s he began serializing novels that further increased his popularity. He soon became one of the most popular Polish writers of the turn of the 19th and 20th centuries, and numerous translations gained him international renown, culminating in his receipt of the 1905 Nobel Prize in Literature for his "outstanding merits as an epic writer." Many of his novels remain in print. In Poland he is best known for his "Trilogy" of historical novels - With Fire and Sword, The Deluge, and Sir Michael - set in the 17th-century Polish-Lithuanian Commonwealth; internationally he is best known for Quo Vadis, set in Nero's Rome. The Trilogy and Quo Vadis have been filmed, the latter several times, with Hollywood's 1951 version receiving the most international recognition. Jeremiah Curtin (1835-1906) was one of the outstanding linguistic field-workers of the 19th century, though much of his material remains in manuscript form. His scholarly reputation rests primarily on his activity as folklorist and translator of the works of Henryk Sienkiewicz (1846-1916), the Nobel Prize-winning novelist. Curtin was born in Detroit and brought up in the wilds of Wisconsin, where his parents, immigrants from Ireland, made a farm. Leaving home at 21, he worked his way through Harvard, learning new languages at every opportunity. After a brief period as a junior diplomat in St .Petersburg, he worked as a journalist and eventually joined the Bureau of American Ethnology as a field worker. His assignments took him to the Seneca, to various tribes in Oklahoma and to California and Oregon, where he gathered folktales, myths, and other linguistics materials from many languages of aboriginal America. Returning to Europe on numerous occasions, Curtin gathered and published folklore from Eastern Europe and Ireland; in addition, he continued his studies of the languages of the Caucasus, of India and Persia. Work in Siberia resulted in two volumes about the Mongols. Throughout much of the latter part of his life he continued his translations from the Russian and Polish. Seller Inventory # APC9781539917229