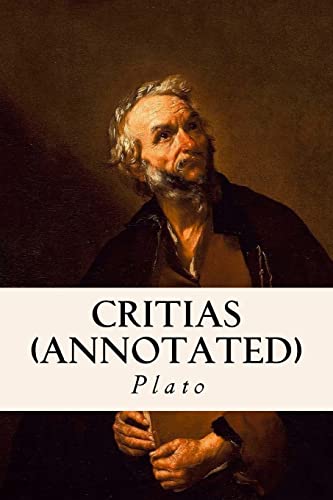 The Critias is a fragment which breaks off in the middle of a sentence. It was designed to be the second part of a trilogy, which, like the other great Platonic trilogy of the Sophist, Statesman, Philosopher, was never completed. Timaeus had brought down the origin of the world to the creation of man, and the dawn of history was now to succeed the philosophy of nature.

Born to a politically connected and aristocratic family between 428 and 423 B.C. , Plato received a good standard of education at an early age, and was able to immerse himself in the intellectual community of Ancient Athens. His most notable contemporary and mentor was Socrates, an eccentric but highly capable philosopher who was to feature as a principle character in most of Plato's scholarly writings. Owing to his high standard of education in art, mathematics, rhetoric and philosophy, Plato was able to assemble a comprehensive philosophy of his own via his favoured form of writing which was the dialogue. In total, over thirty of these Platonic dialogues have survived the passage of time - and together they form the backbone of Ancient Greek philosophy. After enjoying success as a writer and academic, Plato in 385 B.C. founded The Academy. This school was to unite the most capable thinkers of Greece, and would help to advance learning throughout Greek society's Golden Age. It was in the Academy that Plato would instruct and apprentice Aristotle, who was to go on to gain renown as a philosopher and scholar. Owing to his reputation Plato was hired by Dion, whose nephew Dionysus II was the rightful ruler of Sicily - Dion wished his nephew to receive a good education in the art of sound and wise governance. However Dionysus II became suspicious and accused both Plato and Dion of conspiracy - after some time spent under arrest, Plato returned to his homeland. In his late period, Plato continued to tutor and mentor the best young minds of Athens, and he would perish around 348 B.C. having lived beyond the age of eighty. Today Plato's legacy remains lauded: the philosopher ably used logic and reason to imbue insight on democratic governance, while developing a cohesive philosophy on topics such as art, metaphysics, justice and the 'Theory of Forms' - his iconic take on how ideas related to reality.

Book Description Paperback. Condition: New. Annotated. Language: English. Brand new Book. Critias is one of Plato's late dialogues, recounts the story of the mighty island kingdom Atlantis and its attempt to conquer Athens, which failed due to the ordered society of the Athenians. Critias is the second of a projected trilogy of dialogues, preceded by Timaeus and followed by Hermocrates. The latter was possibly never written and Critias was left incomplete. Because of their resemblance (e.g. in terms of persons appearing), modern classicists occasionally combine both Timaeus and Critias as Timaeus-Critias. According to Critias, in ancient times, the Earth was divided among the gods by allotment. The gods treated the humans in their districts much as shepherds treat sheep, tending and guiding them like nurselings and possessions. They did this not by force, but by persuasion. In those days, the areas which are now the islands of Greece were high hills covered in good soil. A number of great deluges came (including the global flood of Deucalion), and because no soil washed down from the mountains to replace the lost soil, the soil in that land was stripped away, causing much of the area to sink out of sight, and the islands that remained to become the "bones of a dead body." Athens in those days, was very different. The land was rich and water was brought in from underground springs (which were later destroyed by earthquake). He describes the civilization of Athens at that time as ideal: pursuing all virtue, living in moderation, and excelling in their work. He then moves on to describe the origins of Atlantis. He said that Atlantis was allotted to Poseidon. Poseidon fell in love with a mortal girl named Cleito (daughter of Evenor and Leucippe), and she bore him a number of children, the first of which was named Atlas, who inherited the kingdom and passed it onto his firstborn for many generations. Critias then goes into a great deal of detail in describing the island of Atlantis and the Temple to Poseidon and Cleito on the island, and refers to the legendary metal orichalcum. Critias then reiterates the remarkable virtue of the Atlanteans, saying: "For many generations, as long as the divine nature lasted in them, they were obedient to the laws, and well-affectioned towards the god, whose seed they were; for they possessed true and in every way great spirits, uniting gentleness with wisdom in the various chances of life, and in their intercourse with one another. They despised everything but virtue, caring little for their present state of life, and thinking lightly of the possession of gold and other property, which seemed only a burden to them; neither were they intoxicated by luxury; nor did wealth deprive them of their self-control; but they were sober, and saw clearly that all these goods are increased by virtue and friendship with one another, whereas by too great regard and respect for them, they are lost and friendship with them.". Seller Inventory # APC9781518684821