Items related to Nuggets of Gold: Genesis through Malachi

Nuggets of Gold: Genesis through Malachi 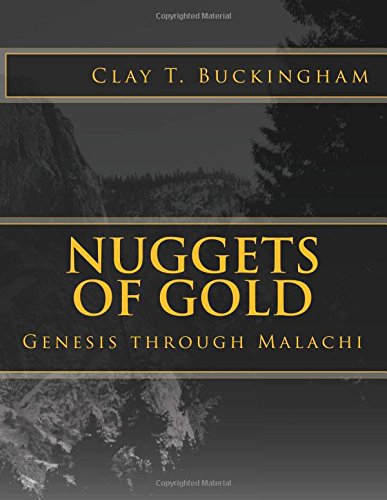 Several years ago Clara and I started reading through the Old Testament again. This time we decided to identify a few passages from each book which seemed to have particular relevance for today. Shortly after we started, it became clear that everything was relevant in one way or another. This made it necessary to be very selective. For every passage chosen, we found many, many other passages just as relevant. As we proceeded, I decided to write some comments on each passage selected. This led to the idea of sending these passages and comments out to our immediate family and some close friends, which we did, starting in 2006. We felt like we were digging for nuggets in an endless gold mine so we started using the title, “Nuggets of Gold.” It has taken over 6 years to complete the project. It may seem presumptuous that a layman with no formal theological training would attempt an exegesis of this scope. My credentials are that during the past 65 years, since deciding to follow Jesus, I have participated in over 2,000 small group Bible study sessions, mostly under the auspices of the Officers’ Christian Fellowship of the USA. I have also been privileged to sit under the preaching and teaching of hundreds of the most godly and effective preachers and Bible teachers of this era, both in military chapels, civilian churches, and at OCF conferences and conference centers. But probably the best preparation for this task has been a lifetime of personal reading, studying, memorizing and meditating on the Word of God. “The entrance of thy Word brings light. It brings understanding to the simple.” (Psalm 119:130) So why did we choose the Old Testament and not the New Testament? The reason is simply that the Old Testament was written first, and lays the groundwork for the New Testament. The writers of the New Testament, which is all about Jesus, were all Jews, steeped in Jewish history and traditions. They had a thorough knowledge and understanding of the Hebrew Scriptures. They frequently referred to the Old Testament as they wrote the New Testament books. The roots of the New Testament are deeply embedded in the Old Testament. It is impossible to understand the New Testament without a working knowledge of the Old Testament. Reading through the Old Testament leaves one with a sense of anticipation that there is more to come. The Old Testament is not the end of the story. The New Testament is the continuation of the Old Testament. Neither is complete without the other. The New Testament is ‘the rest of the story.’ “And this is the testimony (of the New Testament). God has given us eternal life, and this life is in His Son (Jesus Christ). He who has the Son has life; he who does not have the Son of God does NOT have life.” (1 John 5:11-12) ” ... But these (the New Testament scriptures) are written that you may believe that Jesus is the Christ, the Son of God, and that by believing you may have life in His name.” (John 20:30-31) Although I am the author of the comments in “Nuggets of Gold,” Clara has read them thoroughly and made many helpful suggestions in content, syntax and grammar. She has also provided comprehensive and skillful editing. So this really has been a joint project. A final note: some of the views expressed in the following pages are controversial and non-traditional. They are my own interpretations of the meaning and application of the biblical texts, and I take full responsibility for these views. Whether you agree with them or not, hopefully they will cause you to think deeply and critically about your own convictions. Gold mining in the Old Testament has given me a wonderfully new and refreshing sense of my Jewish heritage as a believer and follower of Jesus the Messiah, the Christ, the Son of God, my Savior and my Lord.

1. Nuggets of Gold: Genesis Through Malachi

2. Nuggets of Gold: Genesis through Malachi

3. Nuggets of Gold: Genesis through Malachi

4. Nuggets of Gold: Genesis Through Malachi