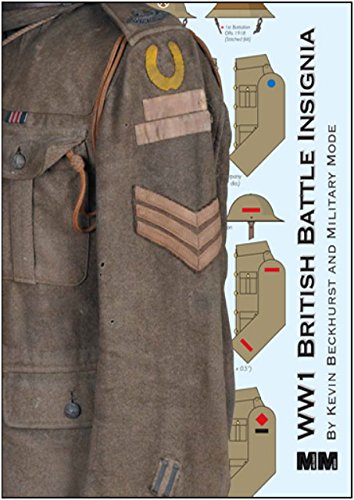 This is a bit of a departure from the books that we normally expect to see from Military Mode. Rather than a photographic catalog of rare and exciting artifacts, it is something of a Rosetta Stone, a key to deciphering the very complex system of colored unit recognition insignia developed by the BEF during the Great War. The Imperial War Museum reached out to all units of the British Army after the Armistice, asking them to reply with details on their own specific unit identification color patches and painted insignia. Not all replied, but many did. Kevin Beckhurst, a collector and researcher, sorted through this primary source material decades later to produce a massive (31cm x 22cm x 10cm), one-off, hand illustrated tome entitled 'WWI BRITISH INSIGNIA 1914-1919'. From Military Mode's introduction: "The original book was found in London in the 1980's, languishing on a shelf within a militaria shop, thought to have been there since the 1960's. With the aid of historian and graphic designer Branislav Radovic we have been able to transpose the information into this modern format and hopefully the efforts will assist collector, model makers and historians alike."