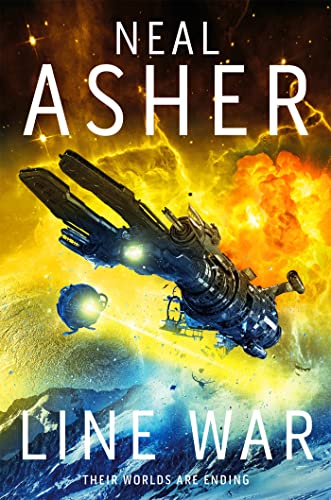 The human Polity worlds are under attack from Erebus, a renegade AI. And it’s now merged with lethal Jain technology, and isn’t afraid to use it. When Erebus kills millions, on a world of no apparent significance, Agent Ian Cormac is sent to investigate. He’s also secretly struggling with an ability no human should possess – and starts questioning the motives of his AI masters.

Further indiscriminate attacks attract the Polity’s most dangerous individuals. Mr Crane, a brass killing machine, seeks vengeance. Orlandine, part AI and part human, hunts a weapon of appalling power. And Dragon plans to wake the makers of Jain technology from their ancient slumber. But can Erebus be stopped – or is this the end for the Polity?

Asher is brilliant at conveying the vastness of deep space, the strangeness of alien life forms and the sweep of planetary horizons – not to mention the vast sweep of the novel itself. Line War is where the Cormac novels have been heading. This is Asher’s best novel yet (SFX)

Book Description 2018. Paperback. Condition: New. Paperback. The Line War is the fifth and final novel in Neal Asher's popular Agent Cormac series.The human Polity worlds are under attack from Erebus, a renegade AI. And it's now merged with lethal J.Shipping may be from multiple locations in the US or from the UK, depending on stock availability. 576 pages. 0.412. Seller Inventory # 9781509868391