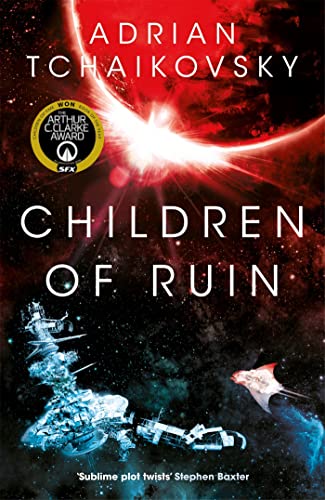 Children of Ruin follows Adrian Tchaikovsky's extraordinary Children of Time, winner of the Arthur C. Clarke award. It is set in the same universe, with a new cast of characters and a thrilling new narrative.

It has been waiting through the ages.
Now it's time . . .

Thousands of years ago, Earth’s terraforming program took to the stars. On the world they called Nod, scientists discovered alien life – but it was their mission to overwrite it with the memory of Earth. Then humanity’s great empire fell, and the program’s decisions were lost to time.

But those ancient terraformers woke something on Nod better left undisturbed.

And it’s been waiting for them.

All underpinned by great ideas. And it is crisply modern - but with the sensibility of classic science fiction. Asimov or Clarke might have written this (Stephen Baxter)

You know you’re in for a ride. . . This book thoroughly engaged me. Children of Ruin is a humdinger of a book I enjoyed immensely (Neal Asher)

Magnificent. This is the big stuff – the really big stuff. Rich in wisdom and Humanity (note the 'H'), with a Stapledonian sweep and grandeur . . . Books like this are why we read science-fiction (Ian McDonald)

Breathtaking scope and vision. Adrian Tchaikovsky is one of our finest writers (Gareth Powell)

Wonderful – big, thinky SF that feels classic without being mired in the past, absolutely crammed with fun ideas . . . Anyone who likes sweeping, evolutionary-scale stories will love this (Django Wexler)

I couldn’t put it down. There is an effortless quality to Adrian’s writing and you’ve clearly got another winner on your hands (James Oswald)

My most anticipated book of the year (Peter F. Hamilton)

A refreshing new take on post-dystopia civilizations, with the smartest evolutionary world-building you’ll ever read (Peter F. Hamilton on Children of Time)

In this powerful narrative, we’ll find a human outpost lying derelict in space, the scout ship that discovers it, and a planet best left unexplored . . . From the author of the hugely acclaimed Children of Time, winner of the Arthur C. Clarke Award.