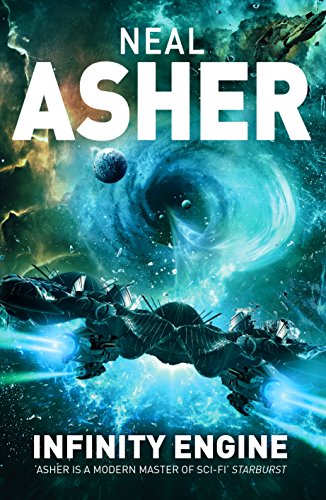 A man battles for his life, two AIs vie for supremacy and a civilization hangs in the balance . . .

Several forces now pursue rogue artificial intelligence Penny Royal, hungry for revenge or redemption. And the Brockle is the most dangerous of all. This criminal swarm-robot AI has escaped its confinement and is upgrading itself, becoming ever more powerful in anticipation of a deadly showdown.

Events also escalate aboard the damaged war factory station where Penny Royal was constructed. Here Thorvald Spear, alien prador, and an assassin drone struggle to stay alive, battling insane AIs and technology gone wild. Then the Weaver arrives - last of the Atheter, resurrected from a race that suicided two million years ago. But what could it contribute to Penny Royal's tortuous plans?

And beyond the war factory a black hole conceals a tantalizing secret which could destroy the Polity. As AIs, humans and prador clash at its boundary, will anything survive their explosive final confrontation?

Signature space opera from Neal Asher: breakneck pacing, high-tech science, bizarre alien creatures, and gritty, dangerous far-future worlds. The high caliber complexity of the Polity universe and characters put the Transformation series and Asher on the same plane as Iain Banks, Alastair Reynolds, and Iain Macauley. Mind-bending tech, creatures, and action generate a hot-blooded plot overlaid with a smart coolness of writing that has gained Neal Asher recognition in the SF/F community as one of the strongest space opera authors. (Rising Shadow)

A stunning conclusion to the Transformation series . . . A mind-blowingly brilliant read! (Worlds in Ink)

Book Description 2017. Paperback. Condition: New. Paperback. Infinity Engine is the third and final novel in the Transformation series, by bestselling science fiction author Neal Asher, following Dark Intelligence and War Factory.A man battles for h.Shipping may be from multiple locations in the US or from the UK, depending on stock availability. 576 pages. 0.750. Seller Inventory # 9781509843473

Book Description 2017. Paperback. Condition: New. Paperback. Infinity Engine is the third and final novel in the Transformation series, by bestselling science fiction author Neal Asher, following Dark Intelligence and War Factory.A man .Shipping may be from our Sydney, NSW warehouse or from our UK or US warehouse, depending on stock availability. 576 pages. 0.750. Seller Inventory # 9781509843473