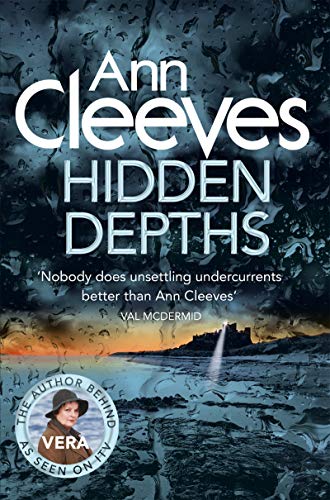 A hot summer on the Northumberland coast and Julie Armstrong arrives home from a night out to find her son strangled, laid out in a bath of water and covered with wild flowers.

This stylized murder scene has Inspector Vera Stanhope intrigued. But then another body is discovered in a rock pool, the corpse again strewn with flowers. Vera must work quickly to find this killer who is making art out of death.

As local residents are forced to share their deepest, darkest secrets, the killer watches, waits and plans to prepare another beautiful, watery grave . . .

'Ann Cleeves deserves a lot more attention than she gets. Her plots are beautifully crafted; her characters are intense and deeply drawn. She's also a real mistress of setting, taking us right into the scene of the action. All of those qualities shine in Hidden Depths, one of her best . . . Cleeves never lets up on the suspense in this very complex puzzle . . . Hidden Depths is masterful storytelling'

'Cleeves sets a good scene, this time in Northumberland during a heatwave, and she brings a large cast to life, shifting points of view between bereaved relatives, victims and suspects in a straightforward, satisfyingly traditional detective novel' Literary Review

'Physically, Vera Stanhope is more Nero Wolfe then VI Warshawski: one character, watching her get out of a chair, thanks that a crane might be in order. But although she is lonely, obsessed with her job and over-fond of a beer, Vera is one of the new fictional detectives who seems not only like a real person, but one capable of conducting a murder inquiry. Ann Cleeves brings the same skill to all her characterisations in this highly impressive story'

'Ann Cleeves is another fine author with a strong, credible female protagonist . . . Cleeves' particular skill is characterization. Her characters range from affluent students to a spoiled woman filled with diffused sexual yearning, from nurses to academics, from painfully doting parents to a group of middle-aged bird-watchers, all with their own secrets. It's a dark, interesting novel with considerable emotional force behind it'

'Hidden Depths is another classic, traditional crime novel in a contemporary setting by Ann Cleeves, winner of last year's Duncan Lawrie Dagger . . . The story follows each of the main characters in turn, but it is fat, lonely Vera, awkward with her staff and unaware that they are frightened of her, who makes the biggest impression in this skilfully crafted mystery'

‘Ann Cleeves improves with every book. Her previous novel, Raven Black, was a deserved winner of the prestigious Duncan Lawrie Dagger for best crime novel of 2006 . . . Hidden Depths is a subtle, nuanced book and Cleeves draws her characters with care and compassion. The landscape of rural Northumberland is vividly evoked and Inspector Stanhope - overweight, fallible and driven by personal demons - is a terrific central character'