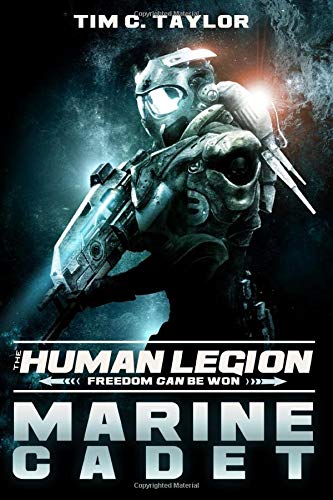 2565 A.D. Five centuries ago, Earth sold 1% of its children into slavery, the price of protection from the regional superpower. One group of slaves was bio-engineered and augmented to fight for alien officers as the Human Marine Corps.

To most alien eyes the Corps is a joke: plasma fodder equipped with third-rate cast-offs and so stupid that they go off to die actually believing they are genuine warriors.

But there are others who look deeper and see potential. To them the humans Marines could be the wellspring of something far greater...

FREEDOM!
Seventeen-year old Arun McEwan is eager to start his new life as a Marine Cadet. Just three more years of drills, combat exercises and brainwashing and he could qualify as a Marine. The alternative is death.

When Arun forges an unlikely friendship with an alien scribe, he crashes into a world of treachery and conspiracy. How can he possibly survive three more years when every day brings a new deadly threat?

But survive he must because his new alien allies show him glimpses of his destiny — a vision of a better future that only he can forge.

A dream called the Human Legion.

Book Description CreateSpace Independent Publishi, 2014. Paperback. Condition: Good. Connecting readers with great books since 1972. Used books may not include companion materials, some shelf wear, may contain highlighting/notes, may not include cdrom or access codes. Customer service is our top priority!. Seller Inventory # S_267440902