Items related to The Life and Afterlife of Harry Houdini

Posnanski, Joe The Life and Afterlife of Harry Houdini

The Life and Afterlife of Harry Houdini 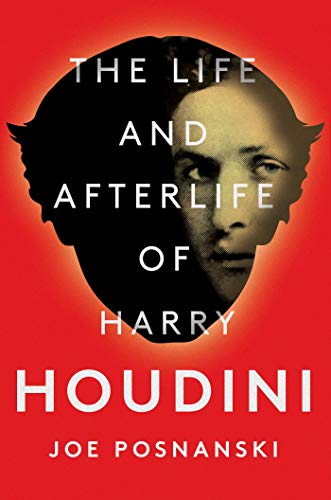 Award-winning journalist and New York Times bestselling author Joe Posnanski enters the world of Harry Houdini and his legions of devoted fans in an immersive, entertaining, and magical work on the illusionist’s impact on American culture—and why his legacy endures to this day.

Harry Houdini. Say his name and a number of things come to mind. Escapes. Illusions. Magic. Chains. Safes. Live burials. Close to a century after his death, nearly every person in America knows his name from a young age, capturing their imaginations with his death-defying stunts and daring acts. He inspired countless people, from all walks of life, to find something magical within themselves.

This is a book about a man and his extraordinary life, but it is also about the people who he has inspired in death. As Joe Posnanski delves into the deepest corners of Houdini-land, visiting museums (one owned by David Copperfield), attractions, and private archives, he encounters a cast of unforgettable and fascinating characters: a woman who runs away from home to chase her dream of becoming a magician; an Italian who revives Houdini’s most famous illusion every night; a performer at the Magic Castle in Los Angeles who calls himself Houdini’s Ghost; a young boy in Australia who, one day, sees an old poster and feels his life change; and a man in Los Angeles whose sole mission is life has been to keep the legend’s name alive.

Both a personal obsession and an odyssey of discovery, Posnanski draws inspiration from his lifelong passion for and obsession with magic, blending biography, memoir, and first-person reporting to examine Harry Houdini’s life and legacy. This is the ultimate journey to uncover why this magic man endures, and what he still has to teach the world about wonder.

“Marvelously entertaining . . . Imbued with Posnanski’s infectious passion for all things Houdini, this is a rollicking look at one of the 20th century’s most influential and enigmatic entertainers. . . . Posnanski’s book is not just a biography of Houdini: it’s as much an exploration of why Houdini’s fame and legend endures, and how that legacy has inspired, confounded, and influenced generations of magicians and magic enthusiasts.”
—Library Journal (starred review)

“Wonderful . . . When a talented writer like Posnanski tackles a subject as endlessly fascinating as Harry Houdini, the results are, quite simply, pure magic.”
—BookPage (starred review)

“Enthralling . . . This is a first-class book, a subtle stretching of the biographical form that is also superbly readable.”
—The Times (London)

“Joe Posnanski has produced the most informative and moving book ever written about Harry Houdini. It separates fact from fiction but also tackles the larger question of why the great escapist is still so loved (and hated!) in the magic community today. The Life and Afterlife of Harry Houdini is a remarkable journey into the heart of Houdini World.”
—John Cox, founder of “Wild About Harry” website

“As wise in its insights as it is thorough in its research, The Life and Afterlife of Harry Houdini is more than just a terrific Houdini biography. It is also a book about how we create and regard legends. Like all essential cultural histories, it concerns itself not just with what happened, but with why so many of us have cared so much.” —Linda Holmes, author of Evvie Drake Starts Over

“Whatever mystical inspiration drew Joe Posnanski to the story of Harry Houdini, readers will be forever grateful. Joe’s writing about the mysterious and mythical magician is touched by its own stunning magic.”
—David Maraniss, author of A Good American Family

Joe Posnanski is the author of the #1 New York Times bestseller Paterno. He is a national columnist for NBC Sports and was a senior writer at Sports Illustrated from 2009 to 2012. In 2012, he was named National Sportswriter of the Year by the Sportswriters and Sportscasters Hall of Fame. Before joining SI, he was a columnist for the Kansas City Star for fifteen years, and was twice named the best sports columnist in America by the Associated Press Sports Editors. He is the author of four books and has been anthologized widely. He lives in Charlotte, North Carolina, with his family.

1. The Life And Afterlife Of Harry Houdini

2. The Life and Afterlife of Harry Houdini

3. The Life And Afterlife Of Harry Houdini

4. The Life and Afterlife of Harry Houdini

5. The Life and Afterlife of Harry Houdini (Hardback)

Book Description SIMON & SCHUSTER, United States, 2019. Hardback. Condition: New. Language: English. Brand new Book. Award-winning journalist and New York Times bestselling author Joe Posnanski enters the world of Harry Houdini and his legions of devoted fans in an immersive, entertaining, and magical work on the illusionist's impact on American culture-and why his legacy endures to this day.Nearly a century after Harry Houdini died on Halloween in 1926, he feels as modern and alive as ever. The name Houdini still leaps to mind whenever we witness a daring escape. The baby who frees herself from her crib? Houdini. The dog who vanishes and reappears in the neighbor's garden? Houdini. Every generation produces new disciples of the magician, from household names in magic like David Copperfield and David Blaine to countless other followers whose lives have been transformed by the power of Houdini. In The Life and Afterlife of Harry Houdini, award-winning journalist and #1 New York Times bestselling author Joe Posnanski enters Houdini World to understand why the magician still enthralls people. Posnanski immerses himself in Houdini's past and present, visiting landmarks, museums (including one owned by Copperfield), attractions, and private archives. Filled with false histories and improbable facts, Houdini's life is an irresistible contradiction. His sweeping afterlife is no less fascinating. In rural Pennsylvania, a thirteen-year-old girl finds the courage to leave a violent home after learning that Houdini ran away to join the circus; she eventually becomes the first female magician to saw a man in half on television. In Australia, an eight-year-old boy with a learning impediment feels worthless until he sees an old poster of Houdini advertising "Nothing on earth can hold Houdini prisoner," and begins his path to becoming that nation's most popular magician. In California, an actor and Vietnam War veteran finds purpose in his life by uncovering the secrets of his hero. But the unique phenomenon of Houdini was always more than his death-defying stunts or his ability to escape handcuffs and straitjackets. It is also about the power of imagination and self-invention. His incredible transformation from Ehrich Weiss, humble Hungarian immigrant and rabbi's son, into the self-named Harry Houdini has won him a slice of immortality. No one has withstood the test of time quite like Houdini. Fueled by Posnanski's personal obsession with the magician-and magic itself-The Life and Afterlife of Harry Houdini is a poignant odyssey of discovery, blending biography, memoir, and first-person reporting to trace Houdini's metamorphosis into an iconic figure who has inspired millions. Posnanski takes us on a joyous, thrilling, and, yes, magical journey to discover why Houdini endures-and what he still has to teach the world about wonder. Seller Inventory # AAZ9781501137235

6. The Life and Afterlife of Harry Houdini (Hardback or Cased Book)

7. The Life and Afterlife of Harry Houdini

8. The Life and Afterlife of Harry Houdini

9. The Life and Afterlife of Harry Houdini

10. The Life And Afterlife Of Harry Houdini