Items related to The State We're in: Maine Stories

The State We're in: Maine Stories 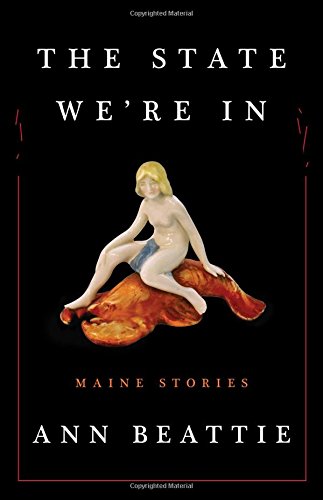 A magnificent new collection of linked stories from a multiple prize-winning master of the short form. The State We're In, Ann Beattie's first collection of new stories in a decade, is about how we live in the places we have chosen--or have been chosen by. It is about the stories we tell our families, our friends, and ourselves; the truths we may or may not see; how our affinities unite or repel us; and where we look for love.

Told through the voices of vivid and engaging women of all ages, The State We're In explores their doubts and desires and reveals the unexpected moments and glancing epiphanies of daily life. Some of Beattie's idiosyncratic and compelling characters have arrived in the coastal state by accident, while others are trying to escape. The collection is woven around Jocelyn, a wry, disaffected teenager living with her aunt and uncle for the summer, forging new friendships, avoiding her mother's calls, taking writing classes, and encountering mortality for the first time. As in life, the narratives of other characters interrupt Jocelyn's, sometimes challenging and sometimes embellishing her view. Riveting, witty, sly, and bold, these stories describe a state of mind, a manner of being. A Beattie story, says Margaret Atwood, is "like a fresh bulletin from the front: we snatch it up, eager to know what's happening out there on the edge of that shifting and dubious no-man's-land known as interpersonal relations." Beattie's sentences, her insights, and her inimitable voice are mesmerizing.

"Sparkling.... [her stories] finish with a quiet flourish, throwing a sudden subtle twist at us... In the end, these carefully drawn, minutely illustrated portraits of women-- and men-- depict slices of life in all its complexity."--Tom Lavoie "Shelf Awareness "

"Moving fluidly between adolescents and septuagenarians, it leaves us with the sense that uncertainty, disconnection, is not a matter of chronology but rather of being alive."--David Ulin "Los Angeles Times "

"What has always set Beattie's stories apart is their open-ended capaciousness, so unlike the deterministic, epiphany-shaped prose that has defined the short form... THE STATE WE'RE IN is a revelation, and is shaded by the perspective of an author who now understands both sides of a generational divide... In a Beattie story, perspective is preeminent, and it's never one you expect. The unwieldiness of human nature, the strangeness of time and circumstance, inevitably shine through."--Megan O'Grady "Vogue "

"Splendid... memorable... Beattie's sociological wit and probity are truly unsurpassed in our literature... though I didn't think this was possible, I experienced an even more heightened awe of Beattie's skills... The dexterity of tone, fearless honesty, and close mapping of lives that may lead to ghastly revelations or even redemption are sheer gifts of reading... this collection has many, many moments of utter surprise. In fact, every page is fitted out with the blessed finery of hypnotic storytelling."--Howard Norman "Washington Post "

"Beattie is a master at depicting the peculiarly painful valor necessary for contending with troubled family members, spouses, lovers, neighbors, even pets. She is also that rarest of beings, a brilliantly comic literary writer... Most often, it's her skirmishing dialogue that makes us laugh out loud... [a] stellar collection by Beattie, a writer revered and honored for her keen insights and wit."--Donna Seaman "Booklist, STARRED review "

"Beattie's signature gifts - her finely tuned language, droll wit, unerring feel for popular culture- are on rich display here...vivid...More than a paean to the Pine Tree State, The State We're In underscores the indelible contribution Beattie has made to American short fiction." --Hamilton Cain "O, The Oprah Magazine "

1. The State We're In: Maine Stories

3. The State We're In: Maine Stories

5. The State We're In Maine Stories

6. The State We're In: Maine Stories