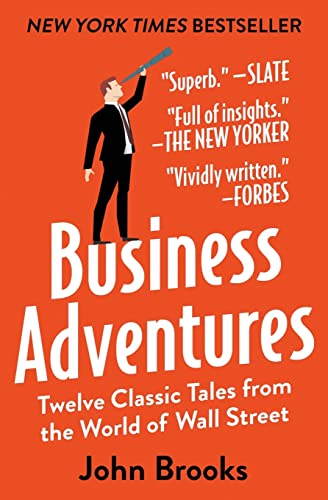 What do the $350 million Ford Motor Company disaster known as the Edsel, the fast and incredible rise of Xerox, and the unbelievable scandals at General Electric and Texas Gulf Sulphur have in common? Each is an example of how an iconic company was defined by a particular moment of fame or notoriety; these notable and fascinating accounts are as relevant today to understanding the intricacies of corporate life as they were when the events happened.

Stories about Wall Street are infused with drama and adventure and reveal the machinations and volatile nature of the world of finance. Longtime New Yorker contributor John Brooks’s insightful reportage is so full of personality and critical detail that whether he is looking at the astounding market crash of 1962, the collapse of a well-known brokerage firm, or the bold attempt by American bankers to save the British pound, one gets the sense that history repeats itself.

Five additional stories on equally fascinating subjects round out this wonderful collection that will both entertain and inform readers . . . Business Adventures is truly financial journalism at its liveliest and best.

“[Brooks] provides the early version of what we think of as Malcolm Gladwell–style or Freakonomics-style lessons. . . . But Brooks features another trait that modern business writers, whether James Stewart, Malcolm Gladwell, or Michael Lewis, do not. Brooks is truly willing to give up his own views to get inside the mind of all his subjects.” —National Review

“More than two decades after Warren [Buffett] lent it to me—and more than four decades after it was first published—Business Adventures remains the best business book I’ve ever read . . . Brooks’s deeper insights about business are just as relevant today as they were back then.” —Bill Gates, The Wall Street Journal

“The prose is superb. Reading Brooks is a supreme pleasure. His writing turns potentially eye-glazing topics (e.g., price-fixing scandals in the industrial electronics market) into rollicking narratives. He’s also funny. . . . He tells entertaining stories replete with richly drawn characters, setting them during heightened moments within the world of commerce.” —Slate

This business classic written by longtime New Yorker contributor John Brooks is an insightful and engaging you-are-there look  into corporate and financial life in America.